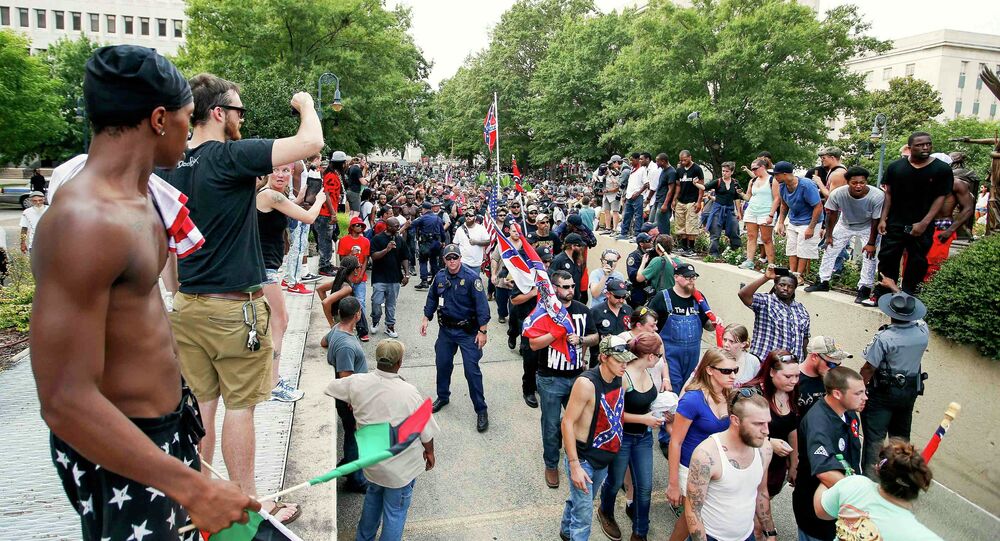 Five people have been arrested at duelling rallies outside the southeast US state of South Carolina State House in the city of Columbia.

MOSCOW (Sputnik) – Five people have been arrested at duelling rallies outside the southeast US state of South Carolina State House in the city of Columbia, the state’s Department of Public Safety (SCDPS) said.

North Carolina-based Loyal White Knights of the Ku Klux Klan staged their rally on one side of the State House on Saturday while the Florida-based Black Educators for Justice gathered earlier on the other side.

The SCDPS confirmed via Twitter making two arrests, each for assault and breach of peace, and an additional arrest for disorderly conduct. At least two arrests have been documented on video and surfaced online.

Authorities estimated crowds reached 2,000 during the peak of the two rallies.

Footage of the KKK and black unity demonstrations depicted each group, kept apart by heavy police presence, shouting slurs at one another.

The rallies took place about a week after the removal of the Confederate flag from the state Capitol grounds upon Governor Nikki Haley’s authorization.

The suspected gunman, Dylann Roof, was a self-professed white supremacist whose photographs brandishing the flag surfaced in the wake of the attack.

The Confederate flag, a symbol of post-Civil War Southern culture, has come to represent racism for a significant portion of US society as an outdated icon of the country’s slave owning past.