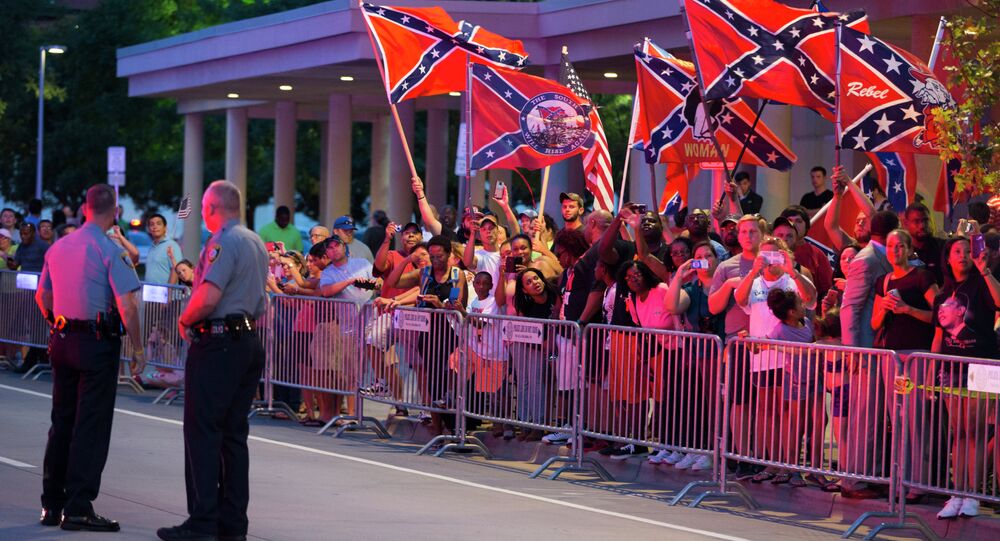 When US President Barack Obama arrived at his hotel in Oklahoma on Wednesday, on a stop to plug his overhaul of the country's criminal justice system, there was a motley crowd waiting for him, including demonstrators brandishing what many consider to be a symbol of America's racist past.

Among those hoping to catch the president's eye were around ten people waving Confederate flags. It's not yet clear whether Obama saw the notorious flag, as the White House didn't comment on the protest.

Eventually, following a heated debate, Republican South Carolina Governor Nikki Haley signed the bill calling for the flag's removal from the capital's Statehouse grounds. Thousands gathered to see it lowered from the site where it had been flown for more than half a century.

Soon after, President Barack Obama tweeted that the decision was "a sign of good will and healing and a meaningful step towards a better future."

There remains a sizeable contingent who think of the flag as symbol of Southern heritage and claim it has nothing to do with racial hatred.

"We don't believe it's a symbol of racism," said Andrew Duncomb, an African-American organizer of recent protests in Oklahoma City. "They're blaming the racist problems on the flag and not on the real problems of America. Through the race lies the people who carry and harbor the hate inside."

During his two-day stay in Oklahoma, President Obama visited the El Reno Federal Correctional Institution as part of his attempt to overhaul the US criminal justice system.

The group of Confederate flag supporters followed Obama from Durant to Bricktown, hoping that their message will be heard. They also plan to set up more rallies in the future, according to KFOR.

Stories Behind the Stories: On Confederate Flag, Trump, Marriage, MORE

Protester Removes Confederate Flag From Government Complex in US Florida