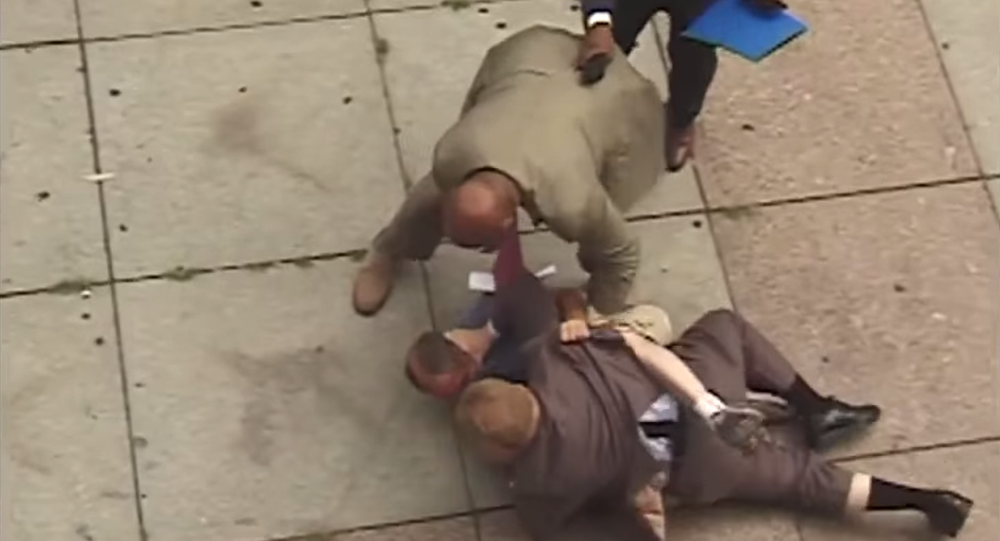 A video taken by a man who was out filming skateboarders has been released, and it shows the Philadelphia mayor stepping in to assist a cop on security detail who was choking a homeless man outside of City Hall on Monday.

The incident began when George Creamer, 56, who is homeless, attempted to confront the mayor, who was there discussing issues relating to the concourse where Creamer sleeps.

Creamer had some concerns he wanted to raise with Mayor Michael Nutter, as those without homes are running out of places to sleep and fear they will be further displaced when the Pope comes to visit the city in September.

“Do you fear you are going to be forced out of here for when the Pope comes?” a reporter with CBS asked Creamer.

“Yeah, we’re going to be forced out of here when the Pope comes,” Creamer replied.

“What about a shelter?” the reporter followed up.

“Mr. Quinones, a shelter is not a nice place,” Creamer stated.

The officer, who was working security for the mayor, is seen grabbing at and assaulting Creamer before shoving him to the ground.  He is then seen very clearly with his hand tight around the homeless man’s throat.

The mayor is seen in the witness’ video attempting to pull the two men apart and subdue Creamer, although he did not appear to be the one who initiated the contact, contrary to local news reports.

“My main role here, quite frankly, was really just try to calm him down,” Nutter told CBS Local.

The local media has reported that nobody was hurt during the incident, but a cut is visible on Creamer’s head in a CBS Local interview.  It is unclear whether it is from Monday’s altercation.

Creamer was not arrested or charged with any crime.

“Seven and a half years we’ve never had any kind of situation and again I was not harmed, I was not threatened, I didn’t feel threatened, I mean I’m from West Philly. I can take care of myself,” Nutter asserted while explaining that he will not be increasing his security detail.