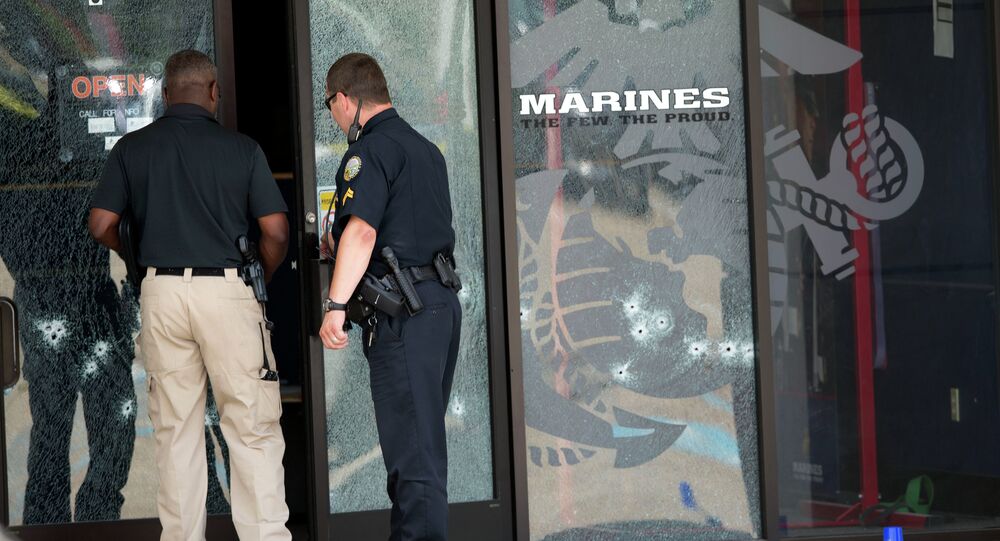 Five individuals were killed in the shooting at the Navy Reserve center in Chattanooga, Tennessee, including the shooter. US authorities are increasing security at federal facilities across the country "out of an abundance of caution" following the incident.

US Attorney General Loretta Lynch announced the FBI would be leading a "national security" investigation into the attacks.

In addition to the gunman, the five fatalities include four marines. Three injuries are also reported, including one police officer who was shot in the ankle, and another military service officer, the Washington Post reported.

"We do know that we have four individuals who are killed who are victims," Mayor Andy Berke said during a news conference. "We know that the shooter was killed at the scene, as well."

The US Attorney for the Eastern District of Tennessee Bill Killian said the incident is being investigated as an act of domestic terrorism. Still, Killian urged the public not to focus on "labels" at this point.

Authorities did not release any information on the shooter at Thursday afternoon's news conference, though they did say they believe the shooting to be a single-shooter incident. Media later reported that law enforcement identified the shooter as Muhammad Youssef Abdulazeez, believed to have been a local resident, originally from Kuwait.

A US military official speaking to NBC News said that the gunman fired between 25 and 30 rounds.

Victims were taken to Erlaner hospital, which was put on lockdown. Sources indicate that an injured officer is currently in stable condition.

President Obama has been briefed on the situation, and the FBI and ATF are en route to assist in the investigation. Speaking from the Oval Office, President Obama vowed a thorough probe, and said that at this time it appears to have been the actions of a lone gunman.

"I am deeply disturbed by reports of a violent attack in Chattanooga," US Senator Lamar Alexander said in a statement. "I have been in touch with federal, state and local officials and will monitor the situation closely. My thoughts and prayers are with everyone involved."

"I am heartbroken by the tragic shootings that have taken place in my hometown," US Senator Bob Corker also said in a statement. "We have been in touch with federal, state and local officials and continue to monitor developments and have offered our assistance. This is a difficult day for Tennesseans and our thoughts and prayers are with all affected by this tragedy."