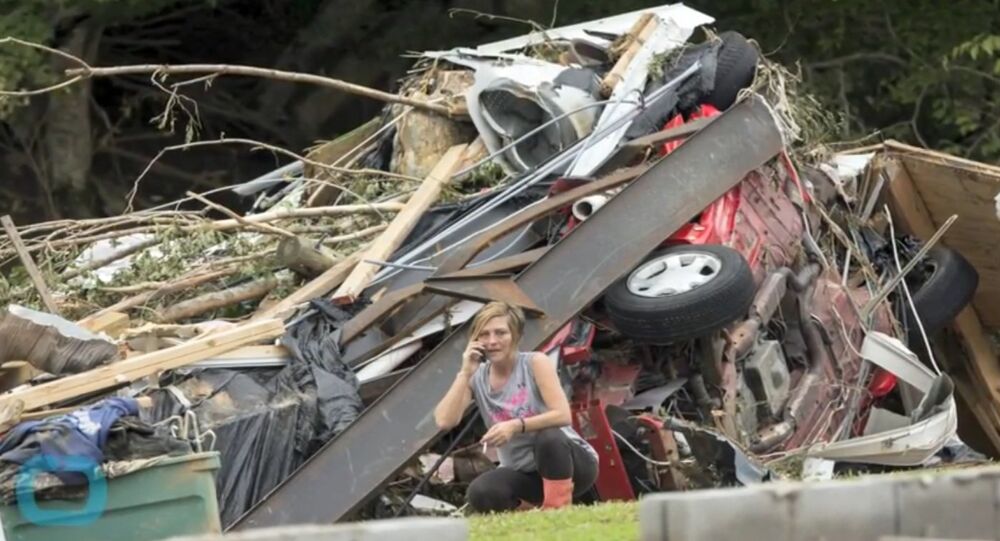 Kentucky rescue teams are fighting their way through knee-deep mud and debris as they continue to search for six people who remain missing after a devastating flood hit the eastern part of the state on Monday.

© Photo : http://www.youtube.com/channel/UChJN82dPtvde5yvrggc0I9g
Kentucky Flooding Sweeps Away House
Two people were found dead and six are still missing after flash flooding, prompted by a series of thunderstorms, struck eastern Kentucky. Officials confirmed that two of the missing persons had been washed away by the water, and suggested that another four could be stuck in their houses without phone service.

One of those swept away is Scott Johnson, 34, from the rural town of Flat Gap, which was devastated by the flooding. According to his father Kevin Johnson, Scott disappeared as he was trying to save his 74-year-old grandmother.

These are the people who lived next to us houses

Scott Johnson led nearly all of his family from their trailer home to higher ground when the flood began on Monday. When the man returned home once more to retrieve his grandmother and his nephew, waters surged and he only managed to push the boy to safety into the branches of a nearby tree.

The body of Scott’s grandmother, Willa Mae Pennington, was found among debris from the family's mobile home the next day, Johnson County Coroner J.R. Frisby said.

In addition to Pennington, Herman Eddie May, 56, drowned Monday evening after leaving his car on a flooded road.

On Tuesday emergency personnel went door-to-door in the hardest-hit neighborhoods rescuing those who were trapped in their houses or, like Scott Johnson's nephew, stranded in trees.

Debris from damaged houses, fallen trees and damaged roads as well as thick mud continues to hamper the rescue operation.

"It just wears your legs out to walk," said Gary McClure, the local emergency management director. "You walk from here to there in that mud and you're ready to sit down. It just pulls you down."

More than 500 homes and about 1,200 residents are included in the hardest-hit area, and more than 150 homes were destroyed, according to official statements. Authorities are also concerned that the muddy, rushing creek, still swollen Tuesday afternoon, had not finished its destruction.

"Any more rain at all is going to be detrimental. It will hurt us," Bobby Moore, a Johnson County 911 dispatcher, noted.

The flooding was caused by a series of thunderstorms that hit the Ohio Valley Monday and Tuesday. A state of emergency was declared as floods damaged houses in Rowan and Johnson counties.

Devastating Flooding in Sochi, the City of Olympics and Formula 1

Number of Wild Animals on Loose in Tbilisi After Flooding Unknown