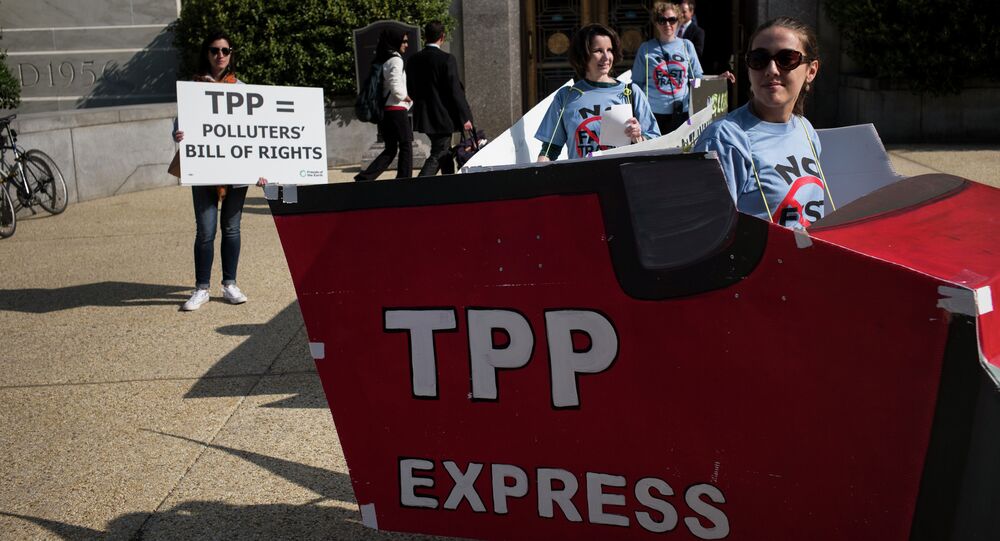 As the Canadian government complicates Washington’s plan to implement the Trans-Pacific Partnership deal, US officials may be weighing a different strategy: moving ahead with TPP, but without its northern neighbor.

As the Obama administration continues its push for the TPP – the 12-nation trade pact meant to solidify America’s economic influence – it has seen its share of pushback. A number of US lawmakers expressed serious misgivings about the deal, partially because of its lack of transparency.

"The government doesn’t want you to read this massive new trade agreement. It’s top secret," Massachusetts Senator Elizabeth Warren wrote in an open letter in April. "Why? Here’s the real answer people have given me: 'We can’t make this deal public because if the American people saw what was in it, they would be opposed to it.'"

President Obama also has opposition from a usually-loyal ally: Canada. As the twelve nations prepare to come to negotiating table at the end of the month, Ottawa has proven to be more resistant to the TPP.

Now, to solve Washington’s negotiating woes, several US senators have urged US Trade Representative Michael Froman to "move forward on TPP without Canada unless a serious offer on dairy, poultry, and agriculture market access" was made, according to a US Senate aide speaking to Reuters.

In response, Froman said he would prefer keep Canada within the trade pact, but is "preparing for all contingencies."

Much that hesitation stems from the fact that Canada’s dairy and poultry industries are worth tens of billions of dollars. Canadian lawmakers are concerned that stipulations within the trade agreement could endanger the supply management system. That system ensures that prices remain high by artificially restricting supply.

"We continue to work with all TPP partners to conclude an ambitious agreement that will create jobs and prosperity for Canadians," Max Moncaster, a spokesman for the Canadian Trade Minister Ed Fast, told Reuters.

Tensions between the longtime allies became apparent last month, when the Canadian government filed a request with the World Trade Organization for $3 billion in tariffs on imports from the United States. Those tariffs will be placed on a number of products, including meat, wine, maple syrup, a number of agricultural goods, and furniture.

This move followed a US labeling law which requires meat companies to indicate where its animals are raised; a measure Canadian officials claim puts their farmers at a disadvantage.

"Despite the WTO’s final ruling that US country of origin labeling measures are discriminatory, the United States continues to avoid its international trade obligations," Fast said in a statement. "Our government will now move ahead under the WTO process and seek authorization for over $3 billion in retaliation."

The United States will host a summit of TPP trade ministers in Hawaii at the end of the month. Expected to cover roughly 40% of the global economy, the trade deal involves Australia, Japan, New Zealand, Mexico, Brunei, Chile, Singapore, Canada, Malaysia, Peru, Vietnam, and the United States.