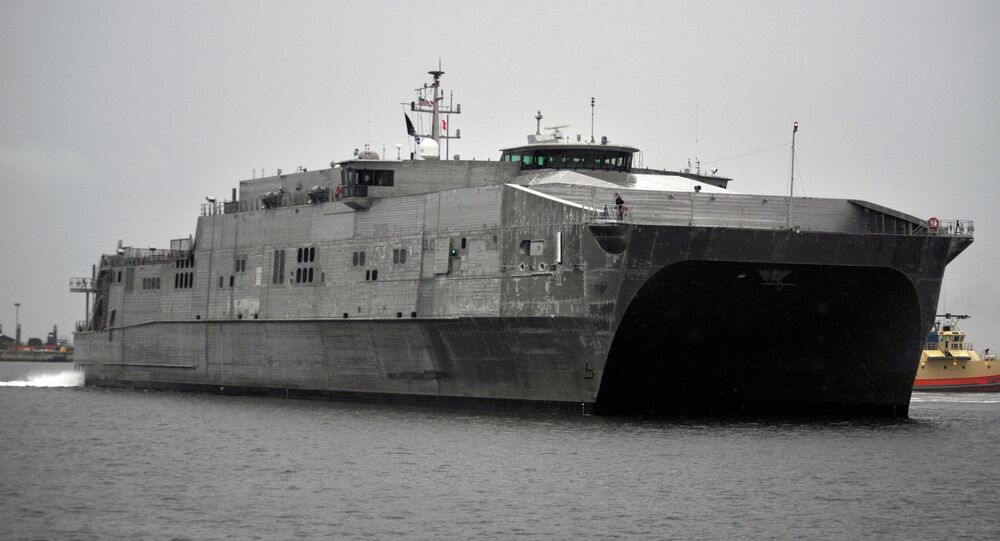 What was originally designed as a rapid-response transport ship, the US Navy’s Joint High Speed Vessel will now be used in a broad range of functions throughout the world’s oceans.

With the capacity to carry as much as 600 tons, these vessels are large. The USNS Spearhead, the first JHSV put into operation in 2011, can travel at 50 MPH while carrying nearly 500 personnel. That speed and size makes the ship ideal for transporting military hardware and troops.

The ship is also designed to be highly modular, allowing it to be refitted with different equipment, based on individual missions, and features a landing pad for rotary wing aircraft.

These attributes are leading US Navy and Marine Corps officials to reconsider the limited function of utilizing the JHSVs as mere transport vessels.

"It is truly a joint vessel to be delivered to combatant commanders as a fast, sizeable transport," Navy spokesman Johnny Michael told Military.com. "The JHSV can help provide security cooperation support and counterterrorism assistance."

And with that potential to perform multiple applications, JHSVs are about to see a lot more action.

"There are plans to put them in every COCOM (area of responsibility). They are going to be everywhere," Michael added.

The Navy already has five of the vessels in operation. The Spearhead’s successful involvement in military exercises off the coast of Africa earlier this year is what forced officials to reconsider the ships’ limited role. Focusing on cooperation between regional navies, Obangame Express 2015 saw the Spearhead function as tactical support.

© Flickr / Office of Naval Research
An M1A1 Abrams tank drives over an advanced light-weight ramp to board a JHSV.

"What you are seeing is a concerted effort to employ these complementary platforms to engage our partners around the world and build partnership capacity," Navy spokesman Lt. Tim Hawkins told Military.com. "In the future, we are going to increasingly put them forward and have them engaged with our partners and allies."

The JSHV’s easy maneuverability also makes it an ideal choice to assist in amphibious assault operations.

"These are fast and maneuverable and can be used in littoral areas where there is a shallow draft," Hawkins added. "Instead of replacing the standard amphibious vessels, the JHSV can provide support to amphibious ships and deep water platforms."

The Navy expects to receive two additional JHSVs by 2016, and is contracted to receive ten in total. The USNS Spearhead is currently conducting a special operation throughout the southern hemisphere, touring a number of countries and participating in humanitarian training exercises.

US Navy Beefs Up Presence in Gulf