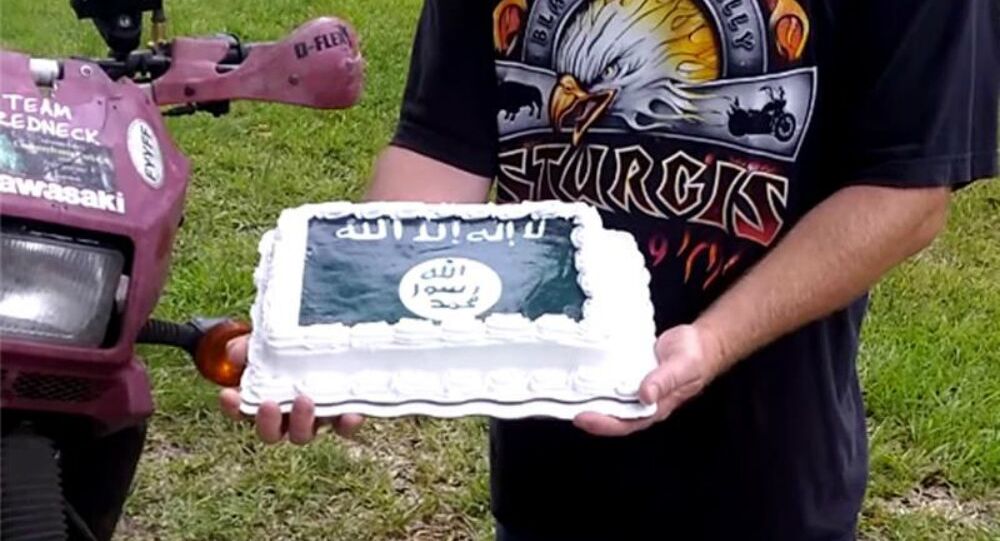 US Retail giant Walmart recently moved to stop selling Confederate flags at all of its stores and online website. One of the chain’s locations even denied the request of a Louisiana man to bake a cake depicting the controversial banner. But when that same customer ordered a cake depicting the ISIL battleflag, the store completed the order.

© Flickr / arete13
KKK Gets ‘OK’ for Cross Burning, Confederate Flag Rally in South Carolina
Chuck Netzhammer said he ordered a cake with the words "Heritage Not Hate” and the image of the Confederate flag on it at one of the company’s bakeries. When his request was rejected, he then ordered a cake decorated with ISIL battleflag, which represents the militant jihadist group fighting in Iraq and Syria. When the store happily completed his order, Netzhammer took video of the cake and posted it on YouTube.

“That's an ISIS battleflag саkе that anybody can go buy at Walmart. But you can't buy a Confederate flag toy, with like, say, a Dukes of Hazzards' car,” Netzhammer claims on the video.

“Walmart, can you please explain why you're alienating Southern Americans with this trash that you allow to be sold in your store, while at the same point, Confederate memorabilia is not allowed?" Netzhamerr added.

A Walmart spokesperson apologized, saying the ISIL cake "should not have been made," the Telegraph website reported.
© AP Photo / Uncredited
ISIL Executes Top Official in Mosul for Plotting Coup Against Caliphate
A representative for the retail giant also noted in an interview with ABC News that the local employee did not know what the design meant and made a mistake.

Walmart was one of the companies, along with Ebay, Amazon and Etsy, that announced they would stop selling products promoting the Confederate flag after debate over the flag erupted following the fatal shooting of nine African-Americans at a South Carolina church by a white gunman.