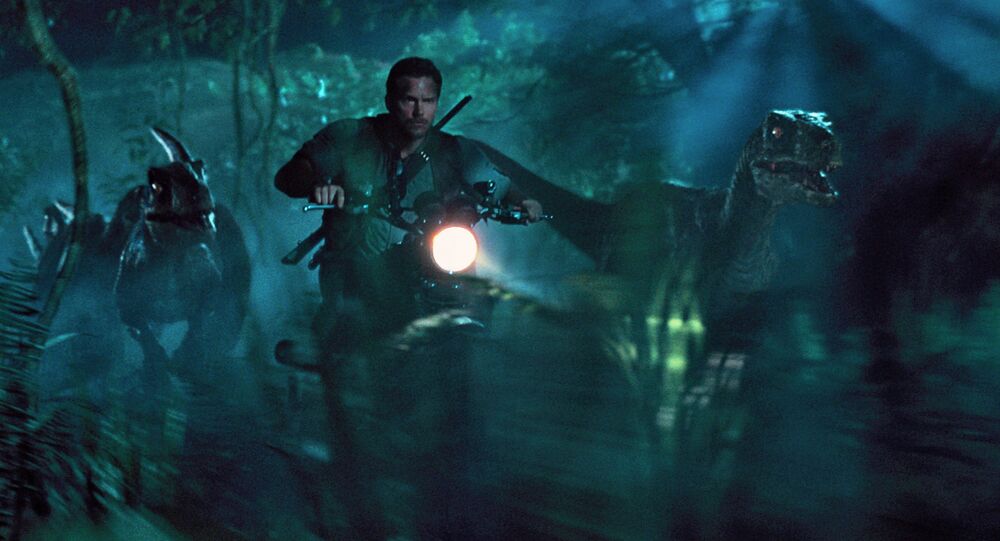 Nearly Half of Americans Believe Dinosaurs and Humans Co-Existed

"Jurassic World", the latest Jurassic Park movie, just broke the world’s record for the highest grossing film on opening weekend. And while most people who flocked to see the movie immediately after its release probably did so to enjoy the fantasy it inspires, a recent poll just revealed that for many Americans, it may as well have been a reality.

© REUTERS / Laurent Mekul/Handout via Reuters
Red in Tooth and Claw: Scientists Reveal Dinosaurs Had Blood Like Ours
Inspired by Michael Crichton’s novel of the same name, the 1993 hit film "Jurassic Park" centers on a theme park of real dinosaurs created by eccentric billionaire John Hammond, played by the late Sir Richard Attenborough, and a team of genetic scientists.

Because most people with a basic education believe it to be impossible, the film in which dinosaurs and human beings share the stage received such widespread accolades for its revolutionary use of visual effects that it continued to set off one of the world’s most popular movie franchises. An additional three installments were released, the latest just this month and a full 20 years after the first.

In a memorable scene in the first movie, Hammond discusses the consequences of bringing dinosaurs back to the world with a few experts, hoping to get their endorsement for his park.

"Dinosaurs had their shot, and nature selected them for extinction," a skeptical Ian Malcolm, played by Jeff Goldblum, cautions.

"Dinosaurs and man, two species separated by 65 million years of evolution have just been suddenly thrown back into the mix together," says Sam Neill’s character, paleontologist Alan Grant. "How can we possibly have the slightest idea what to expect?"

If you’re not living under a rock and know anything about the Jurassic Park franchise, chances are you already know the answer to that question: a lot of death and chaos. And based on the franchise’s global success, people just can’t get enough of seeing exactly how and why dinosaurs and humans make for a catastrophic combination.

And yet, according to a recent poll, quite a few Americans believe that it’s quite possible that men and dinosaurs co-existed on Earth at some point.

YouGov, a for-profit research firm, surveyed 1,000 adults online between June 15 and 17, within a few days after Jurassic World’s release.  With a 4.4 plus-or-minus margin of error, the results of the poll seem to indicate that for many Americans, Jurassic Park was more reality than science fiction.

Asked if they believed dinosaurs and humans lived on the planet at the same time, 14% of the respondents answered "definitely" and 27% said "probably," bringing the total of those who believe it to be at least possible up to an alarming 41%. What’s perhaps even more disconcerting is the 16% of respondents who said they just weren’t sure.

This left only a quarter of respondents, at exactly 25%, who replied with certainty that dinosaurs and humans definitely never shared the planet.

Not surprisingly, the results appear to be aligned with the respondents’ stated religious affiliation. Fifty-six percent of those who identified as "born again" said they believed there was coexistence, while only 22% said they didn’t.

Interestingly, when asked whether they would visit a dinosaur theme park similar to the one in the movies, half of the respondents said no, with 30% saying “definitely no.” So, at the very least, not all the lessons offered by Jurassic Park have gone to waste.

To quote Goldblum’s character in "The Lost World":

"Oooh, ahh, that’s how it always starts," he says referencing the reaction to the awe-inspiring creatures brought back from extinction. "Then later, there’s running and screaming."