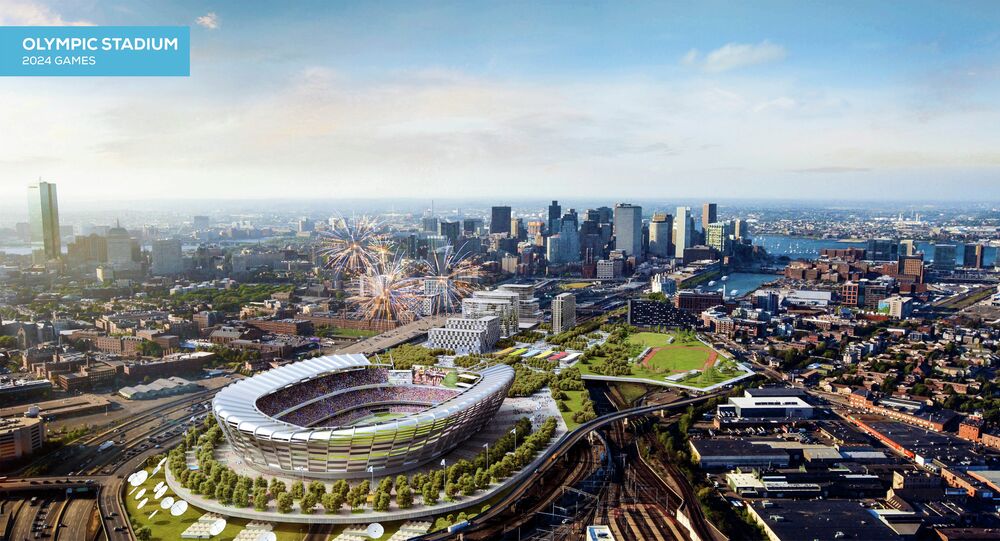 The city of Boston is expected to earn over $210 million if it wins the bid to host the 2024 Olympic Games, the city’s Olympics bid committee said in a new “Bid 2.0” plan.

WASHINGTON (Sputnik) — Boston can expect a financial gain of $210 million from broadcasting rights, tickets sales and other sources of revenue.

“The last three games in the United States generated a surplus,” the plan read on Monday. “[The Olympics in Boston] project a $210M contingency/surplus.”

On January 8, 2015, the US Olympic Committee announced that Boston will represent the United States in its bid to host the 2024 Summer Olympic and Paralympic games.

Boston’s new bid plan projects $4.6 billion in operating costs and promises to expand the tax base while creating jobs and housing.

© REUTERS / Boston2024/Handout via Reuters
Games Opponent Committee Calls for Referendum on Boston 2024 Olympic Games
In January, 2015, 33 percent of Bostonians said they oppose hosting the Olympics, according to a recent survey conducted by the largest public radio station in Boston WBUR. Additional 43 percent said they were not excited about the event.

Aaron Leibowitz, spokesperson for No Boston Olympics, told Sputnik in January 2015 that the city’s bid to host the Olympics has been pushed without asking city residents for input and without holding any community meetings.

But the bid committee said it developed the new “Bid 2.0” plan after holding 22 community meetings and 150 community events.

Only Half of Boston Residents Support Hosting 2024 Olympics

No Plans to Bid for 2024 Summer Olympics – Russian Sports Minister