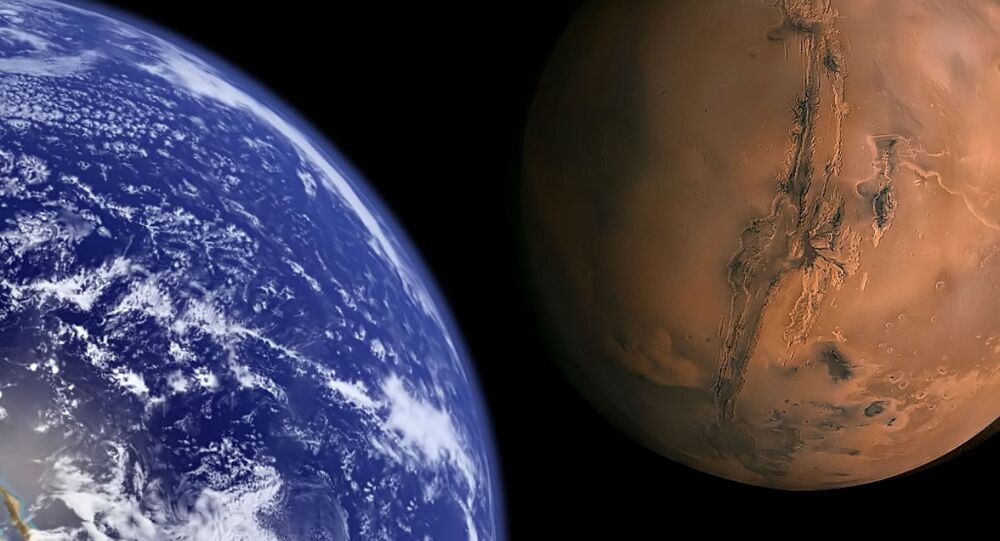 The origins of life on Earth can be traced back to Mars, billions of years ago when the Red Planet was believed to have hosted a more habitable environment than ours, claims a scientist from the SETI institute.

NASA/JPL
NASA Wants to Nuke Asteroids That Threaten to Destroy Earth
Around 3.8 to 4 billion years ago, during the Late Heavy Bombardment period, both Earth and Mars were frequently pummeled by asteroids and comets, resulting in the exchange of debris between the two planets.  Some astrobiologists believe that this is how life was transferred from Mars to Earth.

"We might be able to find evidence of our own origin in the most unlikely place," Planetary scientist Nathalie Cabrol of the SETI institute said in a TED talk in April, "and this place is Mars."

Cabrol has dedicated her research to finding life on Mars’ surface, and she does this primarily by studying regions in Earth that closely resemble the Red Planet.

According to Cabrol, Mars and Earth are both very closely connected. The two have a very similar size and composition, and have spent much of their history exchanging rockets with each other. The process is known as panspermia, and through it, Mars provided our planet with the life it hosted, including much of the water in Earth’s ocean.

"At the time when life appeared on Earth, Mars did have an ocean, it had volcanoes, it had lakes, and it had deltas," Cabrol explained.

But now Mars’ surface shares more in common with the driest and most deserted parts of our planet, because unlike Earth, the Red Planet lost its habitability very quickly.

"When life exploded on Earth, then everything went south for Mars," She said.

The reason for this is mainly due to the fact that Mars lacks a protective magnetic field, therefore allowing the sun’s solar wind to strip the planet of its atmosphere and expose its surface to cosmic rays and ultraviolet light. The planet subsequently lost most of its water, with only vestiges left at the poles. Scientists believe that some water may still be lurking underneath the planet’s surface.

In order to understand what happened to the life on Mars scientists need to examine the planet’s past.

"You only need to go back 2.5 billion years ago in the past of the planet’s life," she said, "We just need a time machine."

And to her, that time machine is right here on Earth.

Cabrol studies the regions on Earth that most closely resemble Mars with the hopes of improving the search for signs of life on the Red Planet. One of those regions is at the top of the Andes Mountains in Chile, situated at an elevation of 3.6 miles. The altitude allows ultraviolet rays to more easily piece through the atmosphere and create an analogous environment to Mars 3.5 billion years ago.

As part of the High Lakes Project funded by NASA Astrobiology Institute, Cabrol traveled there with a team and combed through the mountain for samples of life. The team found that “life is everywhere, absolutely everywhere!” she said.

However, only three different species of life were detected in 36% of the samples collected by the team which, she said, accurately reflects the typical lack of biodiversity in a deadly environment where only the hardiest microbes could survive. So, if any life exists on Mars, it likely had a similar lack of diversity.

Cabrol’s team additionally studied microbes that seek shelter from the sun’s radiation. They found that many hid underneath semi-translucent rocks, thereby allowing them to take in some of the sun’s energy while remaining protected from its radiation.

"If there was life on Mars three and a half billion years ago, it had to use the same strategy to actually protect itself," she said.