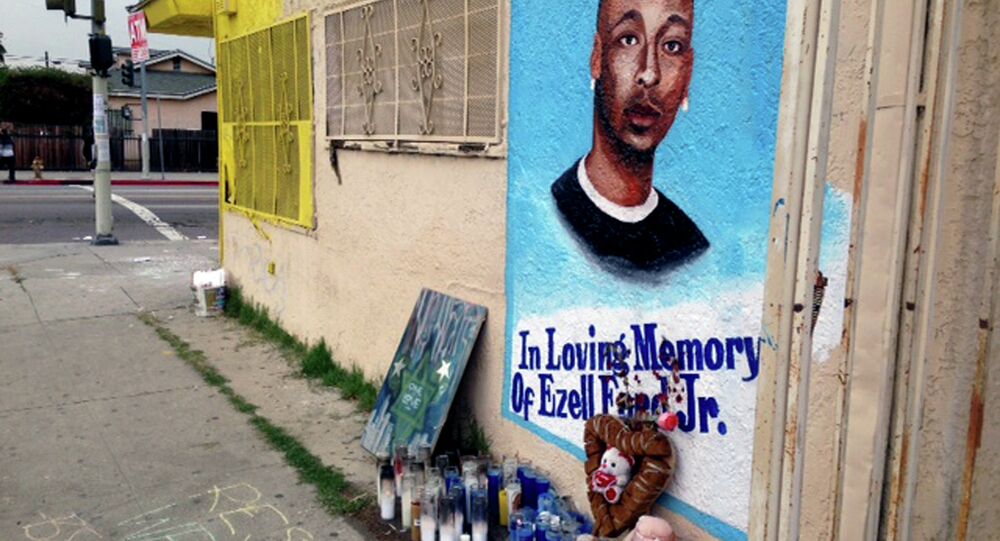 The Los Angeles Police Commission ruled on Tuesday that one officer acted within policy and the other did not, in the police shooting of unarmed Ezell Ford, who was mentally ill and who was left with a muzzle imprint in his back from the shot.

© AP Photo / Damian Dovarganes
LAPD Cops Who Fatally Shot Unarmed Autistic Man Awarded Millions in Lawsuit
The findings were divided into three areas: tactics of the involved officers, drawing of the firearm, and use of deadly force. One officer, though it was not specified which, was found to have acted improperly in all three areas.

Ezell Ford was 25 years old and suffered from bipolar disorder, depression, and schizophrenia and was killed by LAPD Officers Sharlton Wampler and Antonio Villegas two days after Michael Brown was killed in Ferguson.

Ford was out walking near his home on the corner of 65th and Broadway in Los Angeles on August 11, 2014 when he was approached by two Newton Division LAPD officers for making “suspicious movements.” The officers claimed that they thought Ford was trying to ditch drugs as he walked, however no drugs were found on his person or on the scene.

Upon approaching Ford, Officer Wampler put his hands on him, a violation of department protocol. The officers claim that Ford subsequently attempted to grab one officer’s service weapon.

Witnesses maintain that Ford was shot execution style in the back after complying with orders to get down on the ground.

The LAPD also refused to share his autopsy results for 134 days, claiming it was for “officer safety.” That report was eventually released by order of the mayor on December 29, revealing that Ford had been shot three times at close range in his back, side and arm.

Black Lives Matter activists have been camping out on Los Angeles Mayor Eric Garcetti’s front lawn since Saturday afternoon in anticipation of the department’s announcement.  The demonstrators have been calling for the termination of Chief Charlie Beck, who reportedly deemed the shooting justified on Friday.

Speaking earlier on Tuesday, Ezell Ford’s mother Tritobia Ford explained that her son had the mental capacity of a 8 to 10 year old and loved to take long walks.

“How can they not have a reason to stop him, but yet you clear them? How do you question the tactics, but yet you clear them? Mr. (Steve) Soboroff, I saw you on the news and you said that we deserve fairness. I’m begging you, please, please. My son would never grab for no gun. He wanted to live. Please, think about it. Ezell was mentally ill. He wasn’t a lunatic. He wasn’t suicidal, he wanted to live. Ezell has been stopped many times by police before and he lived. The officers did the right thing. These officers did wrong. They did wrong,” Tritobia Ford begged tearfully.

There was at least one arrest during the hearing, as the room was packed full of activists and community members.

Following the police commissioner's announcement, the room erupted in outrage.