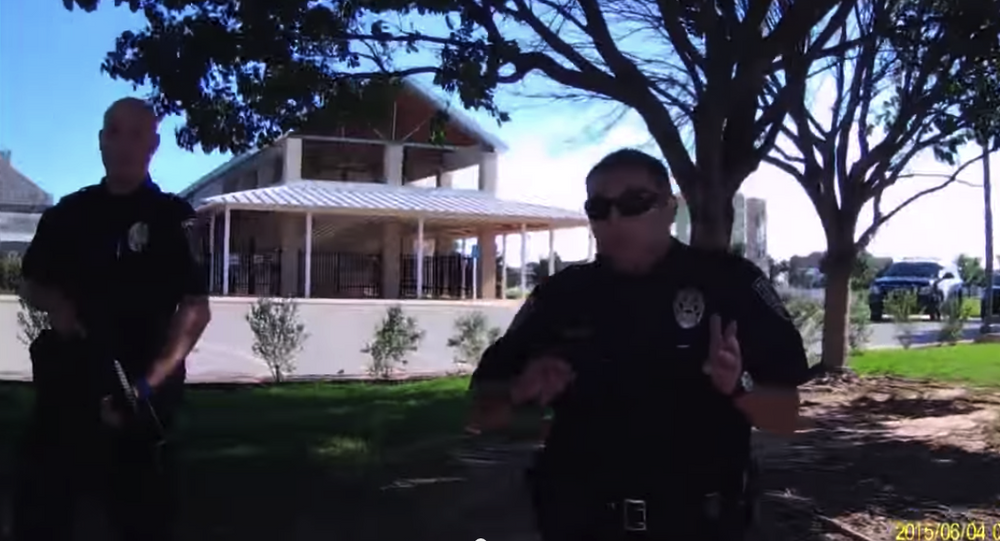 After concealed-carry activists in Texas took their firearms onto private property, they were approached by police carrying assault rifles leading to a tense standoff caught on video.

The man behind the camera is the organization’s president CJ Grisham. It begins on June 3, 2015, when he notices two Abilene police officers near the street corner where he stands with two colleagues who each have an assault rifle strapped to their backs.

“Whoa, whoa, whoa! What are y’all doing? Grisham shouts toward the officers. What are you doing, man?” “What the hell? We’re not breaking any laws … He’s over there with an AR-15 in his hand! He’s telling me to drop my guns right now.”

The two officers then make their way toward Grisham.

© AP Photo / Jerry Larson
Open-Carry Law Passes in Texas Days After Waco Biker Gang Shootout
“Look at him,” Grisham yells. “He’s at the ready. He’s got his hands on the pistol clip and everything. I got my gun behind me and you guys are coming over here with your hands on your rifles like I’m a threat.”

Grisham then tells the officers that he and his friends are within their rights to stand on public property with high-powered weapons. The officers then tell Grisham that he and the other two men are actually standing on private property and therefore trespassing.

As the situation escalates, however, Grisham leaves.

Before getting inside his car he shouts, “You guys wanna come up on us like we’re some sorta terrorists, then I’m gonna respond in kind.”

Open Carry Texas said it reached out to Abilene senior leadership and the department later apologized and promised retraining so its officers could avoid similar incidents.

However, some have taken to criticizing the activists, saying they provoked a response by walking around with loaded assault rifles.

The Irony: Open Carry TX Leader To A Cop,'You Have People With Rifles That Are Frightening Me!' http://t.co/IoTgRKkVxN via @FreakOutNation

Others have wondered if the fact that the activists were allowed to leave showed racial disparity since they are white.

How about 10,000 open/carry non-white owners show up at Tx Capitol for next vote. Hmm. Perspective? https://t.co/sja2uNRmQK

An earlier video of an experiment in which one black man and one white man walked on the same streets with assault rifles demonstrated those discrepancies in action.

The group said it does not intend the video to serve “as an attack on the department.” Instead, Open Carry Texas describes the video as “A training opportunity for law enforcement around the state on what NOT to do when encountering law abiding citizens exercising their right to keep and bear arms. Aggression only leads to needless escalation. We encourage officers to approach armed citizens with caution, but with courtesy. These types of encounters only serve to create division and distrust between the citizenry and police if allowed to continue.”

“An armed society is a polite society,” Grisham said to KTAP reporters. “Guns are not designed to kill. They’re not designed to shoot up movie theaters and schools. We’re trying to show what law abiding citizens look like that carry firearms and really remove that stigma.”

Armed in DC: City Gives Up on Ban Against Carrying Guns in Public Places