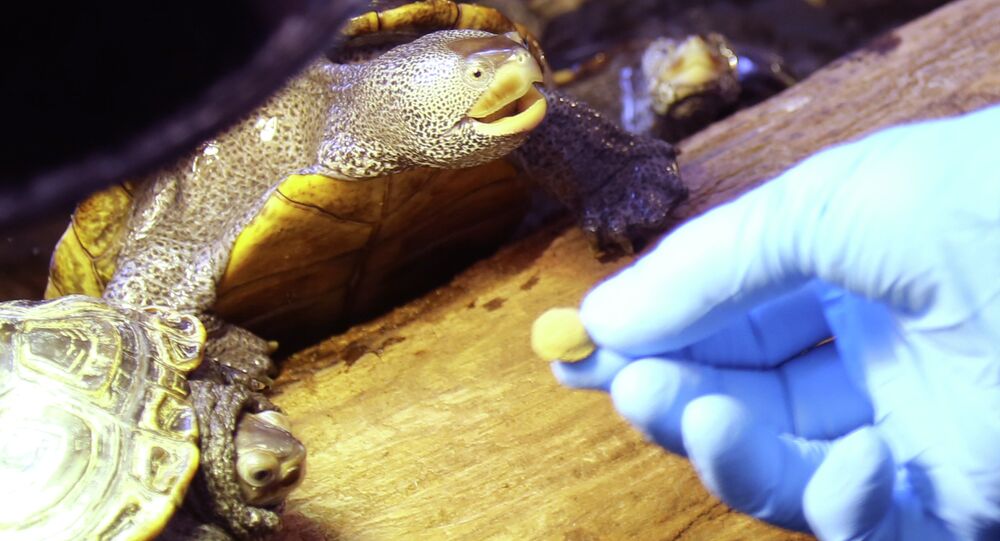 More than 200 dead turtles have washed up on the eastern end of Long Island in the last few months, and scientists believe they are being killed by a waterborne biotoxin that’s being found at ten times the normal level for unknown reasons.

© Flickr / EPI2oh
Deepwater Horizon Oil Spill Caused High Number of Dolphin Deaths
Saxitoxin, which is believed to have been killing off the diamondback terrapin turtles, is produced in Red algae blooms. It then collects in shellfish, which are eaten by turtles. Contamination causes paralysis and death.

"It's a horrible way to go," said Karen Testa, executive director of Turtle Rescue of the Hamptons, according to AP.

Volunteers for the organization have been recovering dozens of dead turtles and sending them to state officials for analysis. Testa says all signs point to Saxitoxin.

A spokesperson for the New York State Department of Environmental Conservation, which runs a marine toxin monitoring program, says officials have been examining the remains and the investigation is pointing to saxitoxin. The turtles’organs will be put through further testing, but results are not expected for several weeks.

© AP Photo / Steve Helber
One Year After Toxic Leak West Virginia Moves to Ease Environmental Laws
Saxitoxin can also cause paralytic shellfish poisoning in humans, which is characterized by stretching and numbness of the face as well as loss of coordination.

According to the Centers for Disease Control, an average of one in four people dies each year from shellfish poisoning.

Christopher Gobler, a professor at Stony Brook University's School of Marine and Atmospheric Sciences, has been studying algal blooms off Long Island for more than 20 years, and he says he’s never examined saxitoxin at the levels they are reaching today.

© AP Photo
Nearly 3 Million Gallons of Toxic Waste Spill in N. Dakota Poisoning Water
"This is a serious threat to public health," said Adrienne Esposito, executive director of the Citizen's Campaign for the Environment. "It's not a joke anymore. When you have a saxitoxin that can kill humans, you need to address the cause."

Meyers said state officials are advising the public to not consume shellfish from the area and have initiated a ban on shell fishing in more than three creeks and bays. The Suffolk County Health Department is warning citizens to avoid swimming in discolored waters.

Gobler and Esposito believe the spike in saxitoxin could be linked to nitrogen increases caused by leaking septic tanks or sewage reaching the bays.

However, there is no clear explanation to why saxitoxin levels have increased.