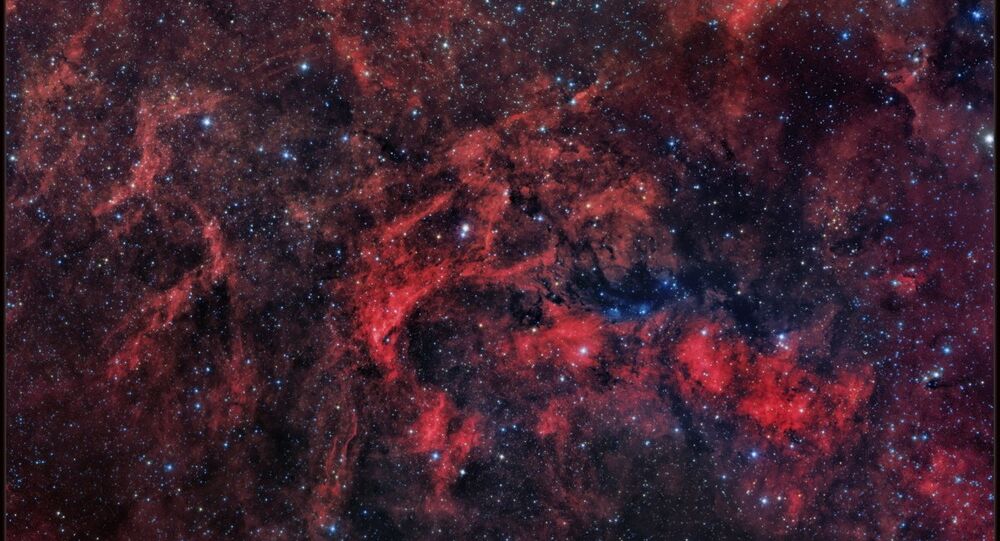 Veteran astrophotographer Terry Hancock captured stunning images of the bright red veins that feed into enormous crimson clouds which look like living hearts in the Gamma Cygni nebula and its surrounding region.

This nebula lies in the constellation Cygnus, and is named after the supergiant star at its center, Gamma Cygnus, also known as Sadr (sadder).

Hancock has photographed the Gamma Cygni region before, but space.com called his newest panoramic view "a cut above."

The full mosaic, which Hancock shared with the website, consists of 187 images, captured during more than 18 hours of observation time from Hancock’s backyard observatory in Fremont, Michigan.

When pieced together, the images cover an area of approximately 6.5 x 5.4 degrees. The region includes multiple stars, dust clouds, dust lanes (the dark canyons between clouds) and nebulae (particularly rich clouds that may form stars).

Particularly vivid in the image is the Crescent Nebula, which lies about 5,000 light-years away from Earth. The nebula consists of material that once belonged to the Wolf-Rayet star, WR 136, which may explode into a supernova in the next million years. Stellar winds collided with the star while it was puffed up as a red giant, creating the outer shell of material.

The star Gamma Cygnus lies at the center of the Northern Cross, which is a smaller arrangement of stars in the constellation Cygnus.

Baby Supernova Helps Researchers Find out Who the Parents Are