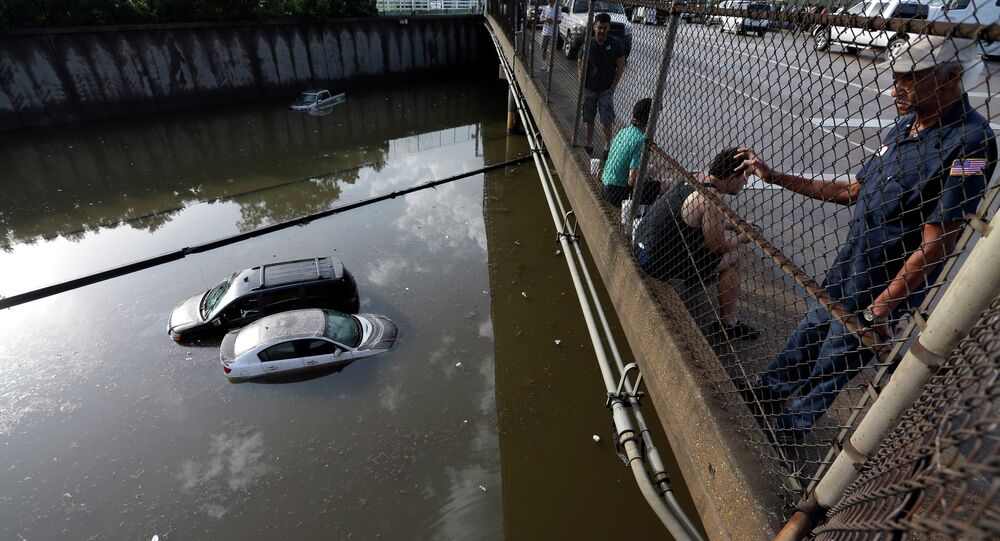 Thirteen people have been killed in Texas as storms that began on Memorial Day weekend continue to dump rain on parts of the state, leading to record floods and destroying hundreds of homes, bridges, and roads.

The death toll is expected to rise in Texas, as numerous people are still missing in Austin and Houston.

Houston, the fourth most populous city in the US, was virtually submerged under water will 11 inches of rain falling in parts of the city on Tuesday. The storm knocked out power, bringing the city to a standstill, as first responders were slowed down due to the inundated highways. Six people have been reported dead in the city, with at least two missing.when

"The rain has the potential to cause additional street flooding so residents are advised to be careful as they commute to work," The city of Houston said in a statement.

According to the city, the latest victim was a 31-year-old man whose body was found near a submerged vehicle.

Flash floods in the city have also resulted in river overruns and numerous abandoned cars. According to the mayor, nearly 4,000 properties have "significant damage."

On Tuesday, a biker found a casket on a roadway in the city. After police opened it and found a body inside, investigators said it was unearthed from a nearby cemetery due to the flooding.

Over 200 flights were cancelled on Wednesday as a result of the tumultuous weather from both Dallas and Houston’s busy airports.

Parts of Austin were also flooded on Tuesday, as the city was hit by up to seven inches of rain.Downtown Austin flooding.

Officials are also concerned that a dam near Dallas may burst due to surging waters, and police have already begun evacuating people living near the area. The Padera Dam in Midlothian, just 23 miles southwest of Dallas, leaked after the heavy rain, allowing water to flow over the top. However, engineers have said that it will hold.

"Engineers have assessed the dam and do not anticipate a failure at this time." Midlothian police said in a statement.

Texas Governor Greg Abbott on Tuesday added eight counties to the list of declared disaster sites, bringing the total up to 21. There is still no damage estimate available for the state, which the country’s main domestic source of energy and has a $1.4 trillion-a-year economy.

Texas Police to Face Threats From Bikers Amid Clashes With Motorclubs