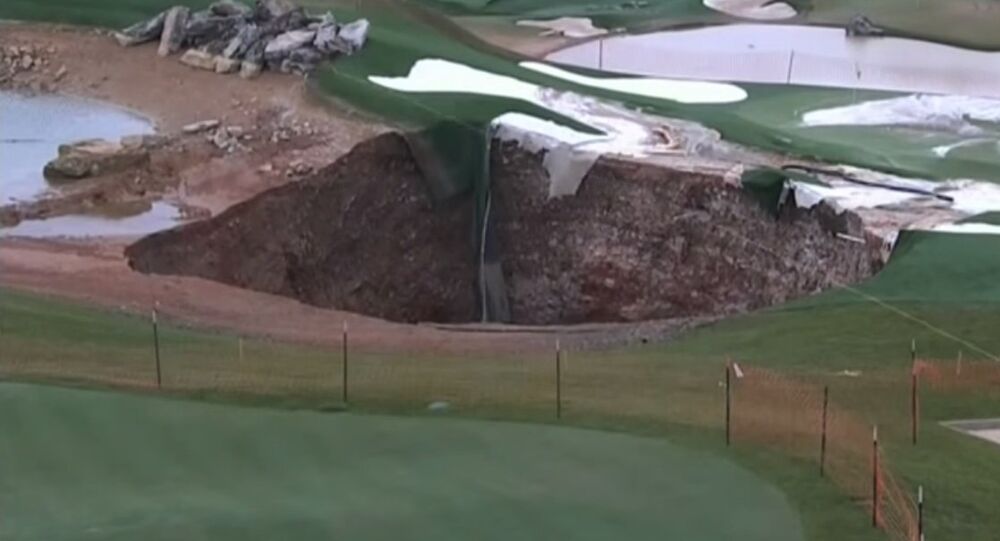 A gigantic sinkhole has mysteriously opened up at a golf course in the US state of Missouri.

© AP Photo / NASA
Australian Geologists Uncover Largest Asteroid Crater on Earth
A mysterious sinkhole has been discovered near a pond at the entrance of the Top Rock Golf Course near the resort town of Branson in Missouri, sources said.

Stretching 80 feet wide, the pit is thought to have formed when two separate sinkholes developed together near the entrance to the golf course. No one was reportedly hurt when the sinkhole, which is 30 feet deep, formed.

Giant sinkhole at Jack Nicklaus designed course. This is quite the hazard! pic.twitter.com/JwJJxMPqtB

In a bizarre twist, the main course, which hosted a Champions Tour event in April 2015, was not damaged and currently open for play, according to media reports.

© Flickr / eliduke
Scientists Discover Water Under Mysterious Antarctica Glacier
Meanwhile, experts from the Missouri Department of Natural Resources are exploring the sinkhole, which reportedly formed near a man-made pond.

A more in-depth evaluation is expected next week, when experts should find the best way to replace the 7,000 cubic feet of earth displaced by the sinkhole.

According to geologists, sinkholes like this one are not uncommon in the region due to the nature of its rock formations, where water is constantly circulating through bedrock below the ground according to scientists.