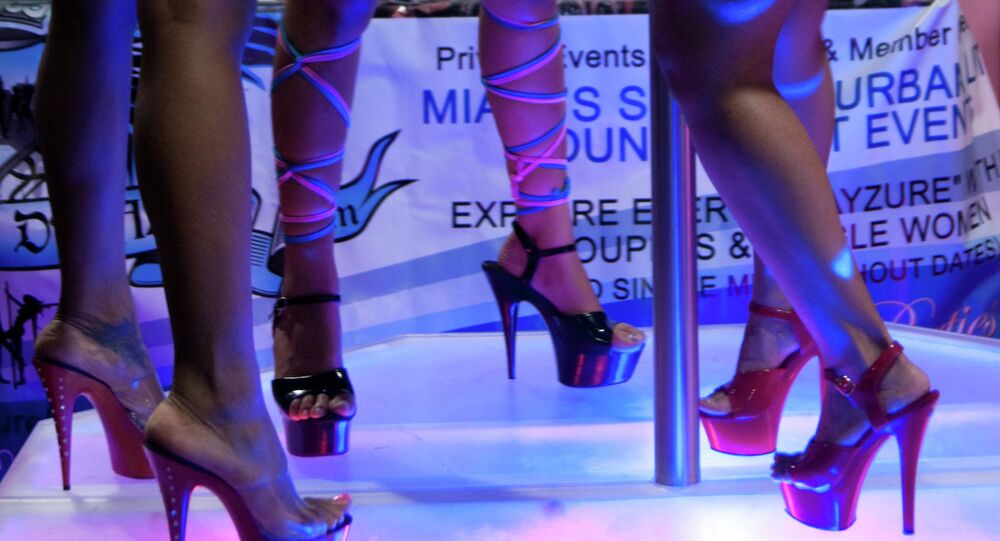 Typically tasked with tracking down the nation’s drug czars, the DEA has apparently been earning a little extra money on the side by running a strip club staffed with illegal workers who performed sexual acts in exchange for money.

"This is the boss," Drug Enforcement Administration agent David Polos said during an employee dispute, lifting a pant leg to reveal a gun strapped to his ankle. "I am the boss."

That’s according to a legal complaint filed against Mr. Polos and fellow Drug Enforcement Administration agent Glen Glover. Both men were arrested on Wednesday for their alleged involvement in owning and managing the Twins Plus Go-Go Lounge in South Hackensack, New Jersey.

According to the complaint, a number of illegal activities took place inside, but just like old Al Capone, it was a filing problem that brought both men before the court. Polos and Glover were charged with making false statements on a national-security form after they hid the fact they were also two of New Jersey’s sleaziest entrepreneurs.

"They also had other secret jobs," US attorney for the Southern District of New York, Preet Bharara, said in a statement, "which they concealed from DEA in order to maintain their national security clearance, betraying the oaths they had taken and creating needless risk for the agency they worked for."

Lying to the government was just the tip of the iceberg. An investigation conducted by the FBI found that many of the strippers were working in the country illegally, most from Brazil or Russia. According to the Wall Street Journal, one dancer claimed she had worked double-shifts in order to pay smugglers who had brought her to the US.

The report also suggests that dancers had to pay nightly "house fees" to be allowed to perform.

The charges also say that dancers frequently performed sexual acts on patrons and employees. This was captured on surveillance footage.

The officers even allegedly took advantage of their status as federal agents on occasions, prominently displaying their badges to ensure things didn’t get too rowdy.

© Flickr / Tom Benson
Go West, Young Man, but Give Me All Your Cash: DEA Agent Seizes $16K from 22-Year-Old

"Mr. Glover is a well-respected, decorated member of the DEA," Glover’s lawyer Cathy Fleming said, according to the Wall Street Journal. "We look forward to trying the case in the court, not the press."

Mr. Polos is also pleading not guilty, but based on the evidence amassed by the FBI, it’s not looking good. While Glover took pains to keep his name off of any club ownership records and paid for his share in cash, he was still mentioned in tax-related paperwork as the lounge’s owner. Some of the cash used to buy the Twins Plus was also traced Glover’s personal accounts. Polos was linked to the operation in a similar way.

Investigators also uncovered a number of damning text messages which seem to pretty clearly indicate Glover and Polos’ direct involvement in managing the establishment, a job that included fixing broken beer coolers, arranging for advertising, and monitoring video surveillance through their cellphones.

"They don’t know I own the bar," Glover wrote to one co-owner before bringing a pair of state troopers to the club.

Polos once sent a text reading "president is in town" to a club manager when complaining about traffic congestion. The complaint states that the two men "then joked about bringing the president to the club so that he could ‘check out’ certain of the dancers."

But why travel all the way to South America when you have your own brothel in Jersey?