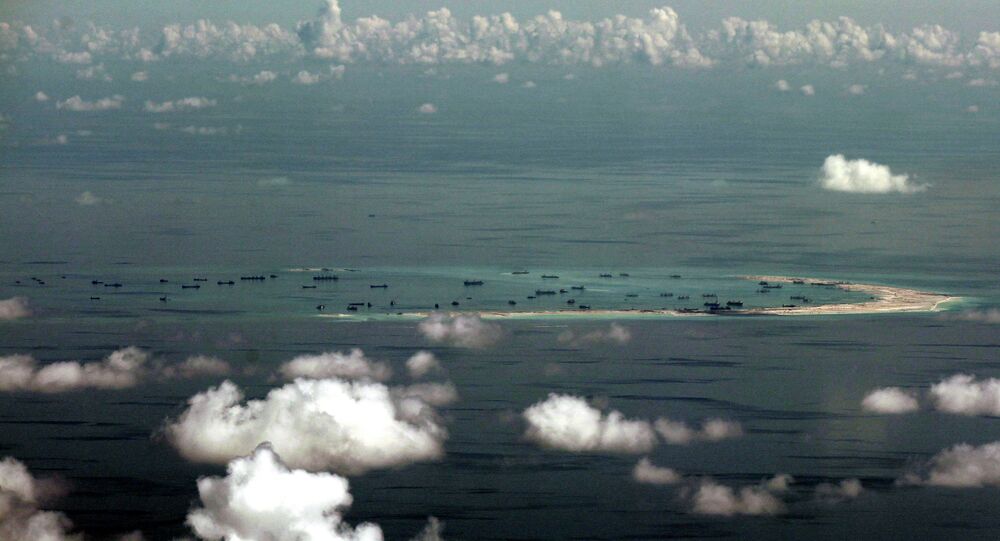 China's navy warned a US surveillance plane flying over man-made islands that Beijing is building in the disputed South China Sea to leave the area multiple times, according to a TV crew aboard the flight on Wednesday.

A Chinese naval vessel issued eight warnings to a P8-A Poseidon, in an apparent effort to establish a no-fly zone near the artificial islands, CNN reported. When US pilots said they were flying through international airspace, a Chinese radio operator responded: "This is the Chinese navy … you go!"

The Poseidon, the US military's most advanced surveillance aircraft, flew at 15,000 feet at its lowest point, according to the network.

The massive Chinese military build-up on the islands is a part of land reclamation efforts in the South China Sea, where multiple countries have overlapping territorial claims. US military officials say it is apparent that Beijing is constructing its own military base on the islands, hundreds of miles from China's shores.

The rapid expansion has alarmed America's allies in the area, as well as the Pentagon, which is carrying out the surveillance flights in order to make clear the United States does not recognize China's territorial claims.

Washington is considering sending military aircraft and ships to assert freedom of navigation around the Chinese-made islands, which has some security experts worried about the risk of confrontation.

"We are considering how to demonstrate freedom of navigation in an area that is critical to world trade," a US official said, speaking on condition of anonymity. "The US and its allies have a very different view than China over the rules of the road in the South China Sea."

A spokesman for China's Foreign Ministry said he was not aware of the incident.

"China has the right to engage in monitoring in the relevant airspace and waters to protect the country's sovereignty and prevent accidents at sea," ministry spokesman Hong Lei said in a regular briefing. "We hope the relevant country can earnestly respect China's sovereignty in the South China Sea."

Footage taken by the P8-A Poseidon and aired by CNN showed construction and dredging activity on the new islands, as well as Chinese navy ships nearby.

"We were just challenged 30 minutes ago and the challenge came from the Chinese navy," Captain Mike Parker, commander of US surveillance aircraft deployed to Asia, told CNN aboard the flight.

China claims 90% of the South China Sea, which is believed to be rich in oil and gas deposits. Beijing's ambitious reclamation work has added to tensions around the Spratly archipelago, where the Philippines, Vietnam, Malaysia, Brunei and Taiwan have competing territorial claims.

Earlier this week, US Deputy Secretary of State Antony Blinken warned that Chinese land reclamation work was damaging stability in the region and could even lead to conflict.

"As China seeks to make sovereign land out of sandcastles and redraw maritime boundaries, it is eroding regional trust and undermining investor confidence," he said. "Its behavior threatens to set a new precedent whereby larger countries are free to intimidate smaller ones, and that provokes tensions, instability and can even lead to conflict."

Beijing says it will not stop reclamation work, with China's foreign minister, Wang Yi, describing its territorial claims as "hard as a rock."