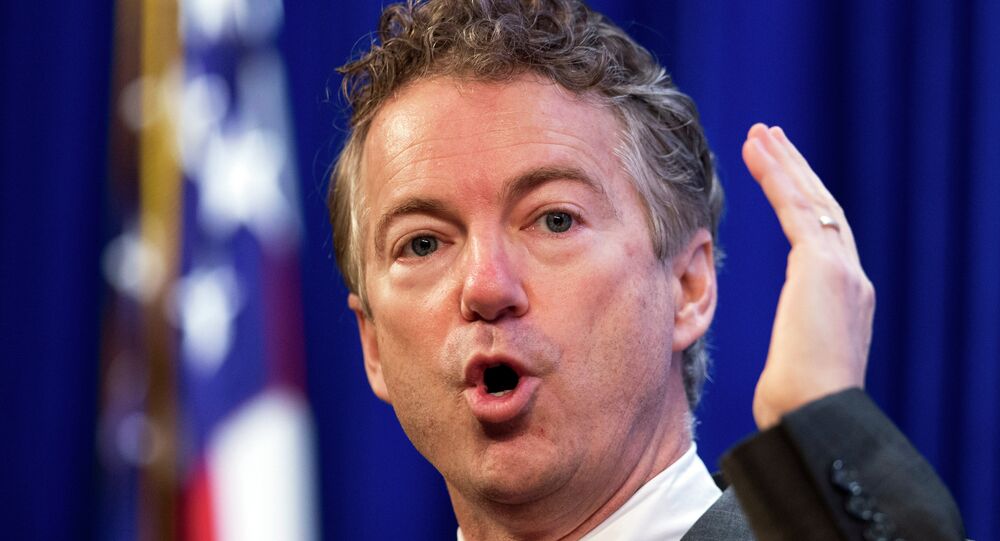 US Republican Presidential candidate and Senator Rand Paul has taken to the Senate floor to hold up the renewal of the Patriot Act legislation.

WASHINGTON (Sputnik) — US Republican Presidential candidate and Senator Rand Paul has taken to the Senate floor to hold up the renewal of the Patriot Act legislation that enabled warrantless government surveillance, according to Paul’s Twitter feed.

I've just taken the senate floor to begin a filibuster of the Patriot Act renewal. It's time to end the NSA spying!

A filibuster is an extended floor speech that prevents any further legislative business until the speaker yields the floor.

The Senator demanded a full debate over the Patriot Act provision which authorizes the bulk collection of US citizens’ telephone metadata.

Paul’s filibuster has brought to a halt a multi-week long Senate floor debate on the giving the US President the authority to negotiate free-trade agreements.

© AP Photo /
Road Paved With Good Intentions: France May Adopt Own 'Patriot Act'
The legislation cannot move forward until Paul either leaves the floor, or a compromise is reached in the Senate to end bulk data collection under the US Patriot Act, US Senator Ron Wyden said during Paul’s filibuster.

The controversial bulk data collection provision of the Patriot Act are set to expire on June 1, 2015, unless it is reauthorized by the US Congress. The US House of Representatives voted on a bill, the USA Freedom Act, last week to amend the Patriot Act. Similar legislation is in front of the Senate.

Today’s floor speech is the second major filibuster by Senator Paul. In 2013, he spoke for nearly 13 hours to prevent the nomination of Central Intelligence Agency Director John Brennan over his role in the US lethal drone program.