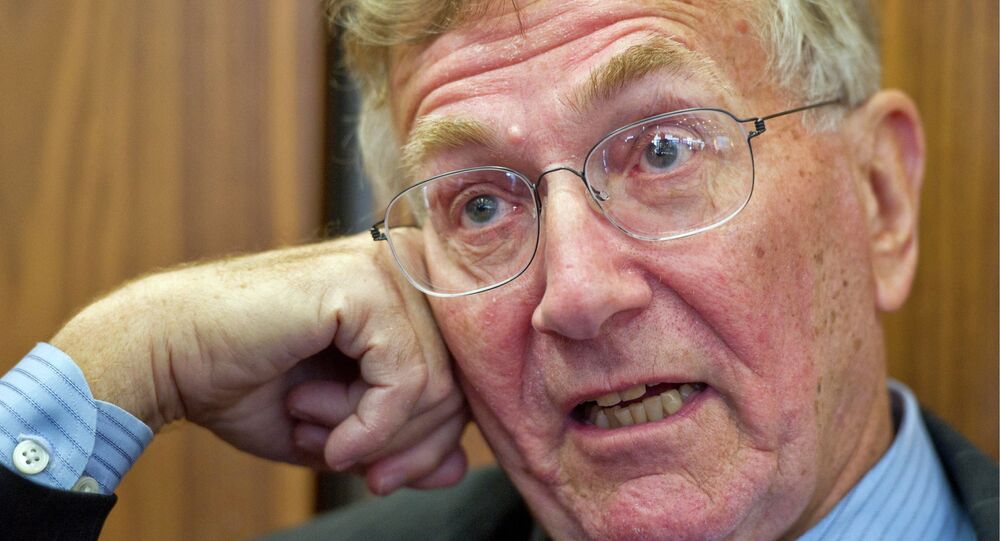 The investigative journalist who wrote that the US government's story about the assassination of Osama bin Laden was a lie is vigorously defending his reporting.

© AP Photo
Obama’s Account of Bin Laden’s Death is One Fabricated Lie - Seymour Hersh
Seymour Hersh's lengthy piece in the London Review of Books ripped apart most of the US’ official narrative surrounding the killing of bin Laden by Navy SEALS in 2011. While some  - particularly Max Fisher writing at Vox — were quick to pick his claims apart, the CIA itself and other journalists have come forward to corroborate parts of Hersh's story. And he is refusing to backtrack on his claims.

The White House called Hersh's story "baseless" and CNN dubbed it a "farrago of nonsense," even as the CIA confirmed to NBC news that one of the major claims of the story was true — namely that Pakistan knew bin Laden’s location before the al-Qaeda founder was killed — and even as other reporters and experts came forward supporting or corroborating claims in Hersh's story.

The Columbia Journalism Review has called the media's antagonistic reaction to Hersh's reporting "disgraceful," as mainstream outlets were quick to dismiss the man who broke the My Lai massacre and Abu Ghraib abuses as a crank or tin-foil hatted conspiracy theorist.

"Yet most of this criticism, over the thousands of words written about Hersh’s piece in the last week, has amounted to 'That doesn’t make sense to me,' or 'That’s not what government officials told me before,' or 'How are we to believe his anonymous sources?'" the CJR wrote.

Hersh has been making the rounds to defend his reporting on mainstream media, usually to come up against just those criticisms listed by the CJR over and over.

Hersh told Business Insider that the criticism of using unnamed sources was way off the mark, especially coming from mainstream media outlets, who have no compunction over reporting stories based on 'an official close to the matter' or 'a senior official who did not wish to be named.'

"It's really an attack-the-messenger," Hersh told BI. "Every day in the newspaper, how many anonymous-sourced stories do you read? Dozens of them."

Hersh defended himself to CNN against the same charge.

"I don't think that's correct to say one anonymous source," Hersh told CNN. "The story says clearly that I was able to vet and verify information with others in the community. It's very tough for guys still inside to get quoted extensively."

One of the most lengthy — and lively — follow-up interviews Hersh has given was with Isaac Chotiner, writing for Slate.

Perhaps Hersh was just a bit tired of answering these questions by the time Slate got around to it, or perhaps it was the fact that Slate had already managed to run several pieces in the space of 36 hours critical of his report, but the interview makes for entertaining reading at least.

Chotiner: Well let’s talk about sources. A lot of the reporting that got us into the last stupid war was based on bad and often anonymous sources. Is there a problem with journalists having a limited number of sources, just generally speaking? Is this a problem? With unnamed sources—

Hersh: Are you kidding me? Unnamed sources? You are smarter than that. This is too boring.

Chotiner: Let me finish my question and then you can yell at me.

Hersh: I am done yelling.

Hersh clearly takes umbrage at a lot of Chotiner's questions and as the CJR points out in its critique, the 'anonymous sources' criticism just doesn't hold up, noting that the New York Times alone published 20 stories relying on anonymous sources in just the five days after Hersh's story broke. The NBC story confirming that Pakistani officials were aware of bin Laden's location and at least one aided the US in finding him itself relies on three anonymous sources.

"[T]he idea that Hersh’s sources were anonymous should not come as a surprise," the CJR notes. "These are highly classified operations. The Defense Department has openly threatened to prosecute people for talking about the bin Laden raid, even as the CIA leaks its own version of events to friendly reporters and movie producers."

Deferential to Power, Missing the Point

The mainstream media has been pretty quick to defer to official sources on the matter, and, in the face of assertions that contradict official narratives, to dismiss the idea that those official sources may in fact be lying.

Slate's Phillip Carter, for example, quickly defers to the judgements of those whom the report is critical of, as if their dismissal of Hersh bolstered his critique of Hersh's reporting, as opposed to being a totally expected response of people in power to their critics.

"Little wonder the CIA told the Washington Post the report was 'utter nonsense,' and a White House official said it had 'too many inaccuracies and baseless assertions' to respond to each one," Carter writes. Little wonder because they don't like the story, not because the story's false.

Speaking of the CIA, the mainstream media might remember — when the CIA is calling Hersh a liar — that not too long ago the Senate report on torture in the CIA revealed that not only did the agency torture, but, clearly, they also lied about it for years.

As for White House criticism of the story, Hersh says that's just par for the course: people in power want the press to write nice things about them because it helps them stay in power.

"The White House is a political institution," Hersh told BI. "Of course they want to manipulate the press. That's just normal."

Wearied of answering more questions about his reporting than about the actual implications of the story and what it means about the Obama administration, Hersh said it's nothing new for a veteran reporter who writes what powerful people don't want to hear, but that it's not what he wants to talk about.

"It's not a press story — it's a story about what the government does," Hersh said. "If the questions are about the press, I can't help you."

At Vox, Fisher wrote (only one day after Hersh's story was published, to be clear) that corroborative reporting had failed to surface for this report.

"Hersh's earlier blockbusters were all quickly confirmed by dozens of independent reports and mountains of physical proof," Fischer writes. "That's how such exposés typically work: the first glint of sunshine brings a rush of attention, which uncovers more evidence and encourages more sources to come forward, until the truth is incontrovertible."

Of course, as noted above, corroborations are starting to surface. Unfortunately, all of Fischer's, and the media's, attention has been focused not on following up on Hersh's reporting, but on ripping it apart.

US Military, Intelligence Only Know the Truth About Bin Laden Raid