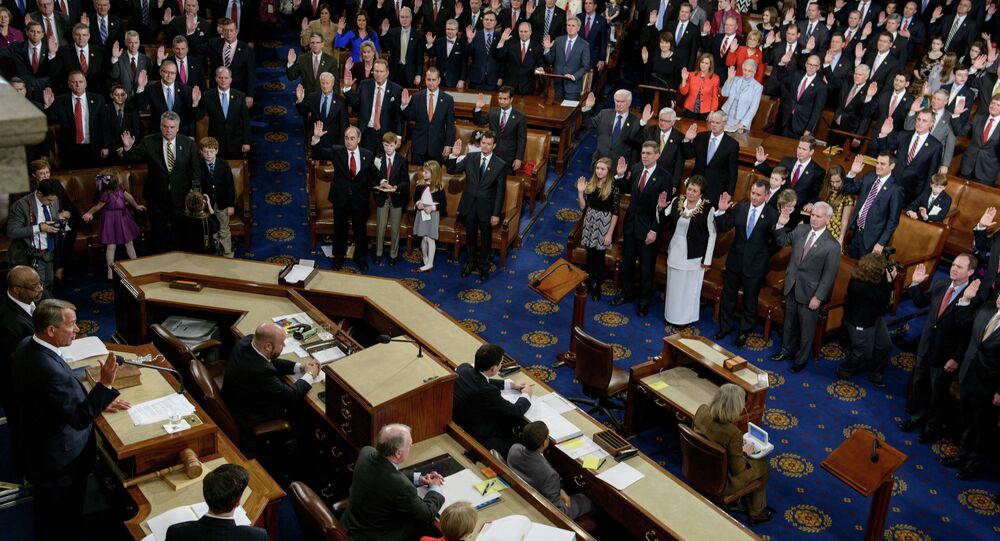 The US House of Representatives voted on Friday to withhold funding for the US implementation of the New START nuclear reduction agreement in the 2016 US National Defense Authorization Act (NDAA), according to the US House record.

WASHINGTON (Sputnik) — The measure passed the House with a vote of 235 to 182 and was tacked onto the larger Defense Department funding bill, the NDAA.

The measure withholds funding for the United States to fulfill its nuclear arms reductions under the New START agreement with Russia.

“None of the funds authorized [under the 2016 NDAA] may be used for implementation of the New START Treaty,” the amendment stated.

The New START agreement was signed by Russia and the United States in 2010 to reduce the total number of deployed strategic nuclear weapons by February 2018.

Both countries are currently on course to achieve the strategic arms reductions by the 2018 deadline, according to public statements from US and Russian officials.

© AFP 2021 / BRENDAN SMIALOWSKI
US House Passes $600 Bln Defense Bill Despite Obama’s Veto Threat
Funding will only be made available to implement the Treaty after US President Barack Obama certifies to the US Congress that Russia is “no longer taking actions that are inconsistent with the INF [Intermediate-range Nuclear Forces] Treaty,” and until Russia returns to compliance with the Conventional Forces in Europe (CFE) Treaty.

The United States has repeatedly accused Russia of violating the INF Treaty, which prohibits the development, testing, or deployment of medium range ground based cruise or ballistic missiles. Russia, in turn, has pointed to alleged US violations.

In March 2015 Russia decided to unilateral end its participation and implementation of the CFE Treaty as a result of NATO’s expansion and its delays in ratifying the Treaty.

The amendment to withhold New START funding was introduced by Republican Congressman Doug Lamborn. Similar legislation to prevent the implementation New START was included in the 2015 Defense funding bill.

The amendment further accuses Russia of illegally occupying Ukrainian territory, and calls for New START funding to be suspended until that alleged occupation ends.