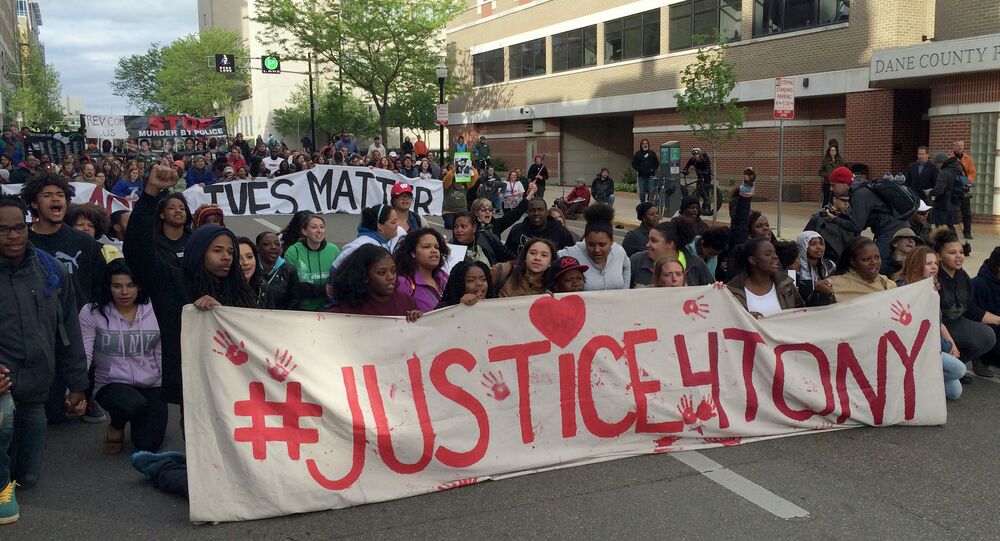 Hundreds March in Wisconsin Over Non-Indictment of Police Officer

Hundreds of residents in Madison, Wisconsin are joining a protest over the District Attorney’s decision not to charge police officer Matt Kenny for killing teenager Tony Robinson in March 2015, a civil rights group said in a Twitter message.

Earlier on Tuesday, Madison District Attorney Ismael Ozanne announced he will not hand criminal charges to officer Kenny because the use of deadly force was “lawful” in the Robinson case.

The District Attorney also pointed out that the toxicology reports of the deceased Tony Robinson found Xanax, hallucinogenic mushrooms and marijuana in his system.

The Family of the Madison, Wisconsin teenager Tony Robinson killed by a US policeman in March 2015, supports peaceful protests over District Attorney’s decision not to charge the officer, Robinson family Attorney Jon Loevy stated in a press conference on Tuesday.

“But the family feels strongly that the protest should be not violent, should be calm.”

"This is politics, not justice," Robinson's grandmother Sharon Irwin said in the press conference.

Shortly after the Twitter announcement, protesters have started to gather around Wisconsin’s Capitol Square chanting "These Killer Cops Have Got to Go" and "Stand up, Fight Back, No More Black People Under Attack."

Maria Hamilton & @Justice4Dontre are currently marching in the peaceful #TonyRobinson protest to support his family. pic.twitter.com/3jKVMARGRn

The civil rights group said lines of police and state troopers were present at the peaceful demonstration.

Moscow Urges Washington to Focus on Human Rights Problems in US