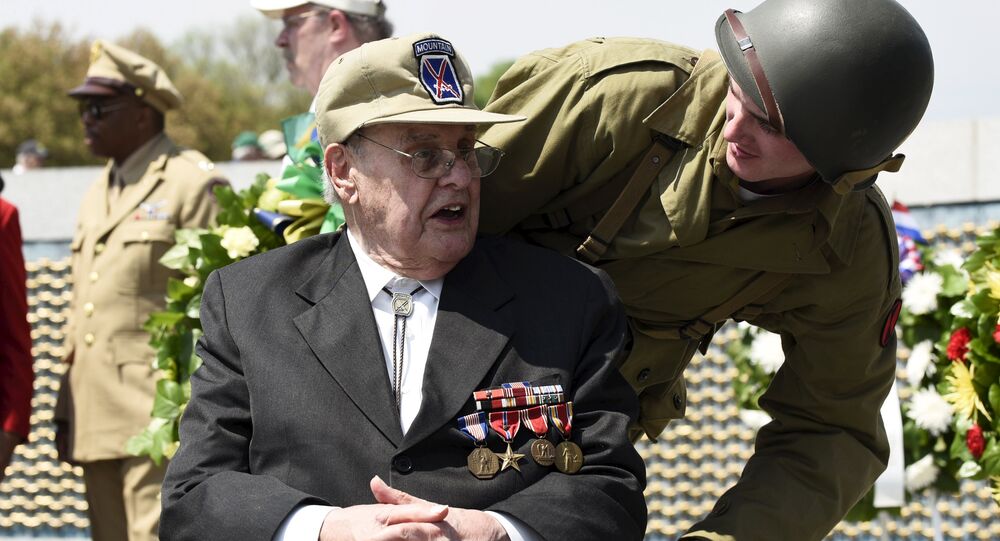 US World War II veteran Charles Lloyd said that Victory in Europe Day and Victory over Japan Day should be our biggest days of celebration in the United States.

© AP Photo / Manuel Balce Ceneta
Soviet Union Made 'Greatest Sacrifice' in WWII – Former US Senator Bob Dole
WASHINGTON (Sputnik) — Celebrations to mark the defeat of Nazi Germany and Imperial Japan should be the most important holiday in the United States, but is currently underestimated, US World War II veteran Charles Lloyd told Sputnik.

"Victory in Europe Day and Victory over Japan Day should be our biggest days of celebration but over the years, it has gradually been put on the 'back burner' so to speak," Lloyd said.

Lloyd and his brothers served as US Navy armed guards during World War II. On May 8, 1945 he and his brother Leonidas were on board a Liberty Ship, used as cargo vessels during WWII, in Antwerp, Belgium.

Lloyd's other brother, Lonnie, served on one of the ships delivering tanks, airplanes and ammunition to the Soviet Union's northern port of Murmansk via the Arctic Ocean. He was later transferred to another ship, which delivered supplies to Soviet Russia via the Caspian Sea.

© Sputnik / Anton Denisov
Former UK Ambassador to Russia Laments Western Boycott of V-Day Parade
Lonnie Lloyd was the last US Navy armed guard to be killed in the Battle of the Atlantic, which was the longest continuous WWII military campaign running from 1939 to 1945.

"I hope the people of Russia celebrate the end of WWII and remember those who stood by them in those times when the German Army was knocking at your door, bombing your cities into oblivion and killing millions of your people with no mercy in their hearts," Lloyd said.

The veteran also said that even though those horrible days are long gone, they should never be forgotten, adding that unfortunately "our world has changed from true patriotism to pacification."