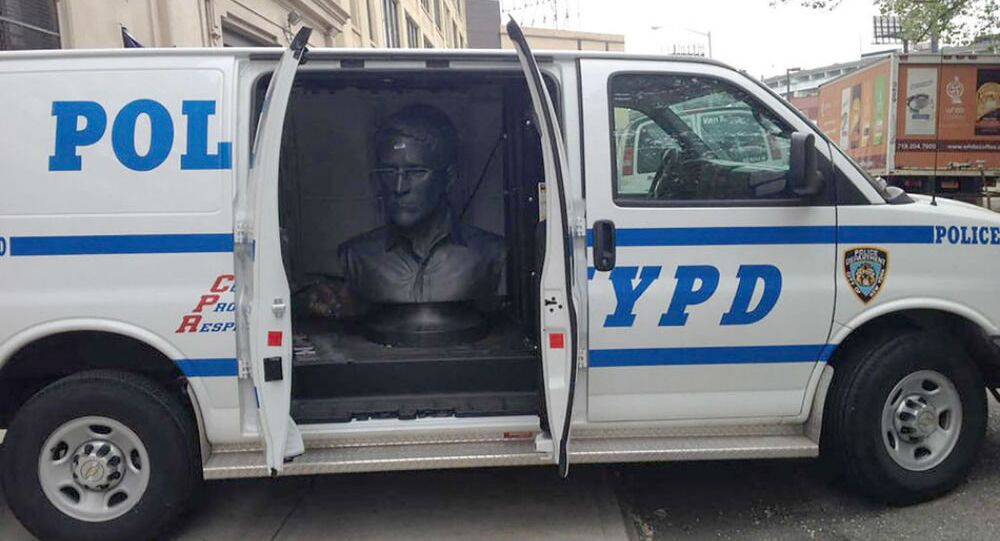 A bust of Edward Snowden that was illegally installed in a New York City park, seized by the NYPD and replaced with a hologram has been returned to the mystery artists who created it.

"We have it back. The statue is free," said the artists, who have not been identified.

"We are thrilled the statue has been released for public viewing. It belongs in public, since the aim of this piece is to help the public have an important national debate about mass surveillance," they said in a statement to Mashable.

The artists added that they wanted to provide an alternative view of Snowden, who the media has labeled a "traitor."

Parks officials removed the 4-foot-tall, 100-pound likeness of the exiled National Security Agency whistleblower only hours after it appeared last month atop a pillar in the Prison Ship Martyr’s Monument in Fort Greene Park in Brooklyn.

But after nightfall, a separate group of artists, calling themselves The Illuminator, projected a hologram of the Snowden bust at the same site.

A police investigation into the unauthorized art ended with two activist artists receiving $50 summonses for being in a park after hours, a noncriminal violation, said attorney Ronald Kuby.

"We're extremely grateful that the city has reconfirmed its commitment to the arts, even those that are unusual and offbeat," Kuby, who would not identify the artists, told the Associated Press.

Law enforcement also has not released the names of the artists.

A photo of the statue in the back of an NYPD van was posted to Twitter by Magdalena Sawon, owner of the Postmasters Gallery, which will display the sculpture starting on Friday in a show focused on surveillance.

It will mark the first time the statue will be on display since it first appeared in the park last month. The show, called “Anonymity, no longer an option,” will run May 8-17 at The Boiler in Brooklyn.

Twitter/ @AnythingtoSay_
A statue depicting whistleblowers Edward Snowden, Julian Assange and Chelsea Manning was unveiled in Berlin on Friday, as a celebration of freedom of expression and the courage to expose truths.

Another statue of Snowden was revealed on Friday as a part of a public art display in Berlin's Alexanderplatz. The piece, Entitled "Anything to Say?", depicts Snowden and fellow whistleblowers Julian Assange and Chelsea Manning.

The artwork comprises the three sculptures standing atop three chairs, while a fourth chair to one side remains empty, suggesting a platform for bystanders to stand on while addressing the public.