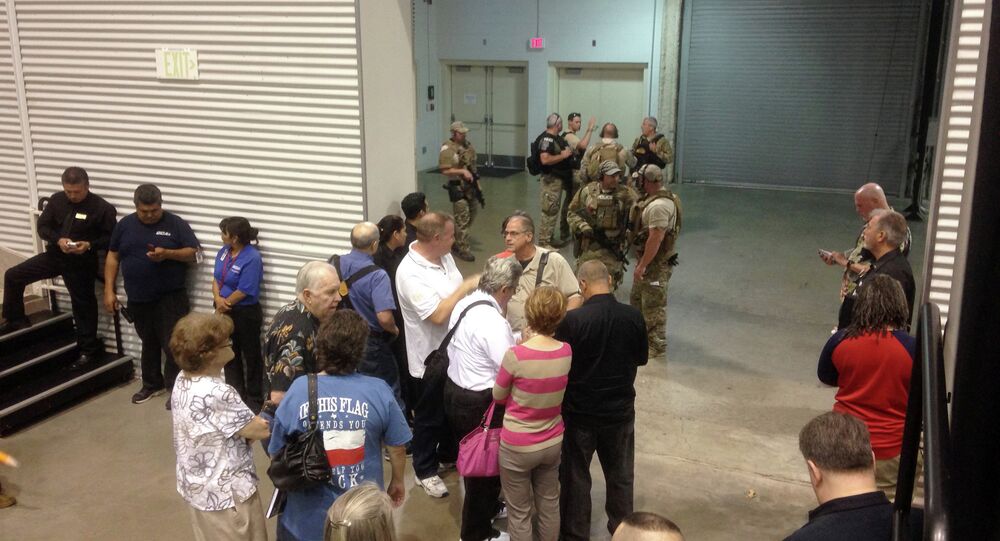 A provocative contest for cartoon depictions of the Prophet Muhammad in a Dallas suburb is on lockdown after authorities reported a shooting outside the building.

Two armed men suspected of having opened fire in a parking area outside the exhibit have been shot dead by police, CBS reports citing the Garland Police Department.

Police shot the both attackers dead.

The security guard, Bruce Joiner, was shot in the leg and taken to a hospital with non-life threatening injuries and was released soon after, CBS said.

Garland PD: two men pulled up got out of a vehicle and started shooting — getting more info now.. @NBCDFW pic.twitter.com/vCl4tIl3Nv

There's been a shooting at a "draw muhammad" event in Texas http://t.co/nciLZyTMVK

Major Police Incident (Garland) Garland Police and Fire are at Walmart off of Garland Rd and Naaman Forest.. A subject…

Posted by Rowlett/Sachse Scanner on Sunday, 3 May 2015

The New York-based American Freedom Defense Initiative was hosting a contest that would award $10,000 for the best cartoon depicting the Prophet Muhammad at the venue.

Pamela Geller, the president of the American Freedom Defense Initiative, said that she planned the Sunday contest to come out for free speech in response to the outcries and violence over drawings of Muhammad.

Some 75 guests of the exhibit were taken to another room and about 48 were evacuated to a nearby high school.

Eyewitnesses say that around 20 shots have been heard at the car parking area near the building of the Center.

Apparently the cops have shot & killed all of the suspects from the Anti-Islam Protest & are now looking for a vehicle that may possibly need to be diffused…#WhatIs ThisWorldComingTo!!

Similar case took place in the office of Charlie Hebdo magazine in Paris, known for its satirical depictions of political and religious figures, including the Prophet Muhammad, was attacked by gunmen in early January.

Twelve people, including the editor-in-chief, were killed in the attack.

The depictions of Muhammad in Islam are offensive to many followers and have recently sparked a wave of violence around the world.

According to the Islamic tradition, any visual depiction of the Prophet Muhammad is considered sacrilegious.

French Court: 'B**ch' for Politician is OK, Charlie Hebdo Satire is Not