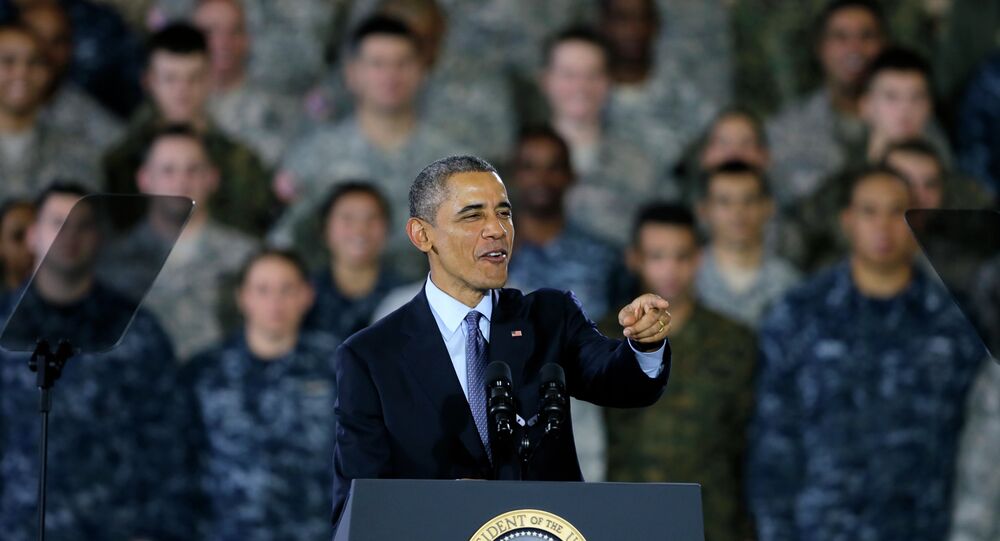 US Accused of Endangering Troops to Justify Ongoing Afghanistan Airstrikes

Although President Barack Obama declared months ago that the United States’ war against the Taliban in Afghanistan has officially ended, the American military continues to launch airstrikes and ground operations.

The White House has justified the continued presence of American forces in Afghanistan by claiming the troops’ responsibility is counterterrorism, and insisted that the Taliban are only being targeted under “force protection” – instances when they pose a threat to US troops.

But instead of ending the war, the military continues to conduct airstrikes – mainly drone strikes – and Special Operations raids that have gone beyond the range of military operations publicly described by the White House.

American and NATO forces have conducted 128 airstrikes this year – 52 in March alone, months after the official end of the combat mission, the New York Times reported. Many of the strikes targeted low- to mid-level Taliban commanders in the most remote parts of Afghanistan.

In January, about 40 American Special Operations troops were deployed to Kunar Province to advise Afghan forces that were engaged with the Taliban along the border with Pakistan.

With the troops on the ground, the command for the American-led coalition called in airstrikes under the authority of force protection, according to two Western military officials who spoke on the condition of anonymity.

© REUTERS / Thaier Al-Sudani
ISIL, Taliban in Afghanistan Declare War Against Each Other

“They are putting guys on the ground in places to justify the airstrikes,” one of the officials told the Times. “It’s not force protection when they are going on the offensive.”

General John F. Campbell, the top American commander in Afghanistan, denied accusations that he was putting troops into harm’s way just to enable more airstrikes. He has insisted that he has the authority to target Taliban insurgents who threaten not just American or NATO troops, but Afghan security forces too.

As for ground operations, Campbell said his options are clear, even if the White House has not outlined them publicly.

“Washington is going to have to say what they say politically for many different audiences, and I have no issue with that,” General Campbell said. “I understand my authorities and what I have to do with Afghanistan’s forces and my forces. And if that doesn’t sell good for a media piece then, again, I cant worry about it.”

He added: “Combat and war and transition, as you know, it’s a very complex thing. For me, it’s not black and white.”

In March, when Obama and President Ashraf Ghani of Afghanistan announced their agreement to slow the withdrawal of American troops, administration officials emphasized that counterterrorism and training were still the focus, not everyday combat missions against the Taliban.

Now, though, the scope of military operations continues to contradict the administration’s public statements. What is unclear, however, is whether that is at the behest of the White House or the military.

“What I’m thankful for is that I have the authority and flexibility to make those very tough decisions,” General Campbell told the Times. “They could have said, ‘Every time you hit a target, you have to get approval.’”