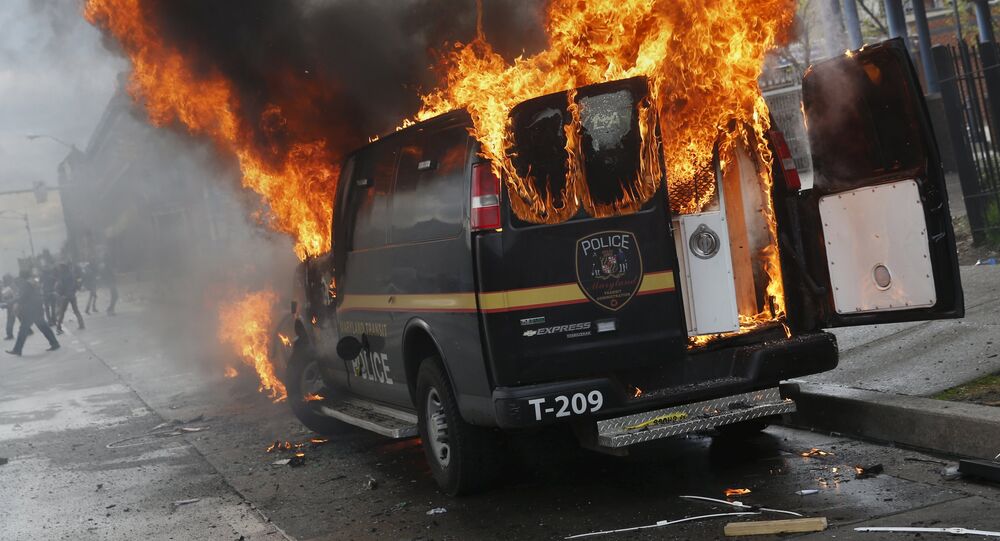 At least 15 officers were injured in Baltimore after protests amid violence following the burial of African-American Freddie Gray, who died in custody, according to local police.

© REUTERS / JIM BOURG
National Guard Moves Armored Vehicles into Baltimore, Troops Authorized to Use Weapons
MOSCOW(Sputnik) — At least 15 officers have been injured in Baltimore and more than two dozen rioters arrested amid violence following the burial of African-American Freddie Gray, who died of spinal injuries while in custody, local police said.

Gray, 25, was arrested on April 12 for possession of a switchblade. By the time Gray arrived at the police station, his condition was critical. Within an hour of his arrest, Gray had fallen into a coma and died on April 19.

The police officers involved in the accident denied using force against Gray during or after the arrest. However, witnesses claim that Gray was screaming in pain while he was being dragged to the police van.

Thousands of activists held demonstrations in the city, calling for release of the video footage showing the events while Gray was being held in custody.

People marched on the street to protest police brutality and racial discrimination. The protests turned violent, and an angry crowd set police cars on fire and damaged several local shops.

Over the past years, several major rallies against police brutality and racial profiling have been held across the United States, triggered by numerous police killings of unarmed African-Americans.

Following the Monday protests, Baltimore Mayor Stephanie Rawlings-Blake declared a state of emergency and announced a one-week curfew in the city from 10 p.m. to 5 a.m.

Baltimore Under Siege as Police & Protesters Battle in the Streets