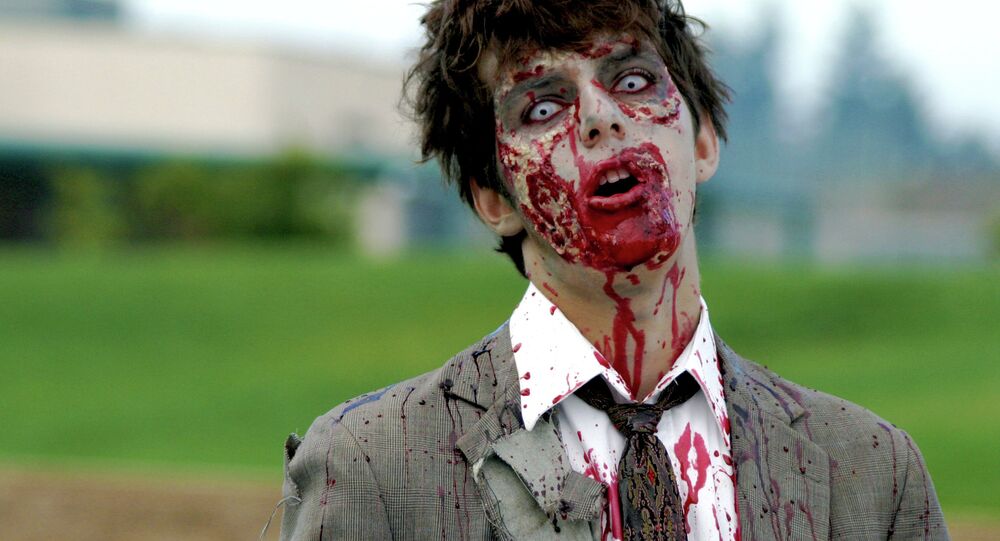 So-called "Preppers" and survivalists gathered in a Utah suburb Friday to check out underground bunkers, kick the tires on armored vehicles, shop around for big knives, swap ideas on food storage and dress up as zombies. Yes, zombies.

"In the prepping industry, we look at zombies as a metaphor," Scott Stallings, one of the organizers of the inaugural PrepperCon expo, told the Associated Press. "Anyone that's coming to take away your stuff, your safety, inflict harm on your family."

"Some view emergency preparedness only as the fanatical ambition of those labeled as ‘doomsdayers’ or the chronically pessimistic," the organization’s website reads.  "PrepperCon seeks to encourage disaster and survival preparedness by making the topic fun and demonstrating how self-reliance is relevant to everyone."

Organizers of the event decided to play up the entertainment aspect of the expo, using a zombie costume contest, and appearances by actors from the popular AMC series The Walking Dead to attract their fellow survivalists, especially the younger crowd, who may be new to the culture.

But the choice of location — in Sandy, Utah outside Salt Lake City — also has serious cultural roots, as Utah's Mormon settlers placed a lot of emphasis on self-reliance as well as food and water storage to survive the journey out west and once they arrived in the desert climate.

"The entire culture started with the idea of prepping," said Stallings, a Mormon himself from Murray, Utah.

The expo is of course a place for companies to ply their wares: whether that's (big!) knives or water filtration systems, clothing or solar energy systems. The expo also planned workshops and trainings, from women's self-defense to a certification course on carrying a concealed weapon under Utah law.

Under the motto "Prepare. Protect. Survive. Thrive", the event purports to cover a variety of scenarios of civilizational collapse.

A class on how to defend your home explains that "Not every scenario in the prepperverse results in a bug-out to a well-stocked retreat in the hills.  In actuality, most emergencies will have you bugged-in and waiting until things cool down."

Stallings said his interest in being prepared to live self-reliantly started at a young age, when he tried — unsuccessfully — to convince his mother to let him live alone in the wilderness. As an alternative, he joined the Boy Scouts, and has been building his survival skills since.

"PrepperCon started because everyone kept asking me, 'When something happens can I come to your house?'" Stallings said. "My answer is no. I don't have enough stuff to take care of everybody. But I can help you."

Who Survives the End of the World in Moscow?