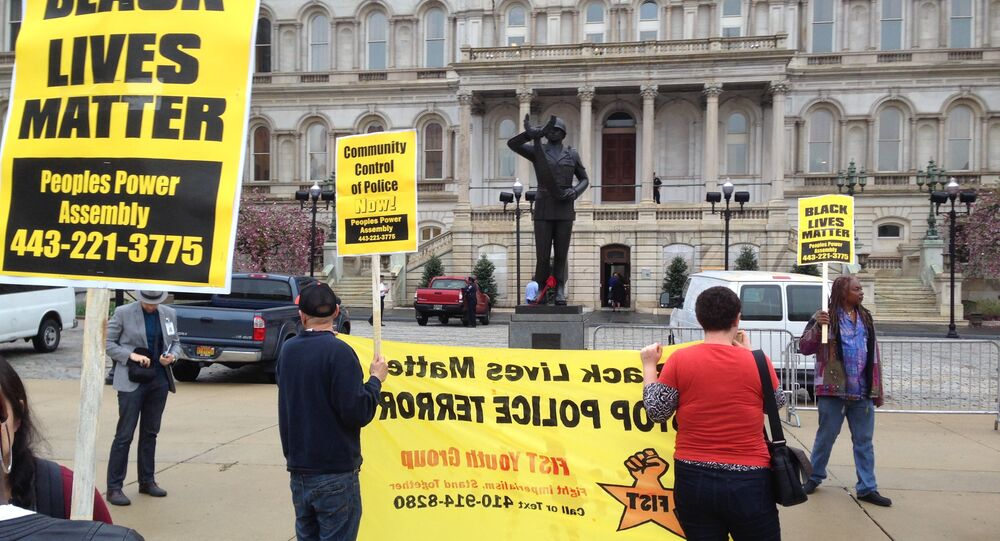 Crowds took to the streets of Baltimore calling for justice for Freddie Gray who died after being detained by police.

On Thursday, local media reported that hundreds of people had taken to the streets of city of Baltimore for the fifth day in a row, calling for justice for Gray.

The Baltimore Police Department announced through its twitter account that two persons had been arrested as result of the demonstration, after activists reportedly confronted the police during major protests outside the Western District police station.

© AP Photo / David Dishneau
Thousands March in Baltimore Against Police Brutality After Black Man's Death
“We want to try to keep things under control. The last thing we need is more violence in Baltimore City,” Gov. Hogan said, justifying his decision to send reinforcement to the city as quoted by the Baltimore Sun on Thursday.

However, Hogan stressed, that local law enforcement agencies will proceed to play a primary role in handling the protests.

The newspaper reported, citing a police spokesman, that 32 troopers with expertise in crowd control had been deployed at the request of the city authorities and had already arrived in Baltimore.

"@rousseau_ist: Baltimore is Unified Like Never Before Demanding Justice for #FreddieGray pic.twitter.com/37FyFC9zX3"

On April 12, Gray, 27, was detained by police at a known spot for drug dealing, on a street in the west side of Baltimore, and placed in a police van. When the van arrived at the police station it was discovered that Gray was suffering from a severe spinal injury and could not talk. He was hospitalized and died a week later, on April 19.

© AP Photo / Manuel Valdes
Media Attention to Police Brutality Creates Impression of Violence Spike
Earlier, the police officers involved in the accident denied using any force against Gray during or after the arrest. However, at least two videos recorded by witnesses show Gray being dragged to the police van while screaming in pain.

Gray's arrest and death sparked numerous protests in Baltimore. Over the weekend, people took to the streets to protest police brutality and racial profiling in demonstrations similar to those seen in Ferguson, St. Louis, following the death of unarmed black teenager Michael Brown who was killed by white police officer Darren Wilson in August 2014.

According to the Killed By Police website, Gray was the 348th person killed by US police or who died while in police custody since the beginning of 2015.