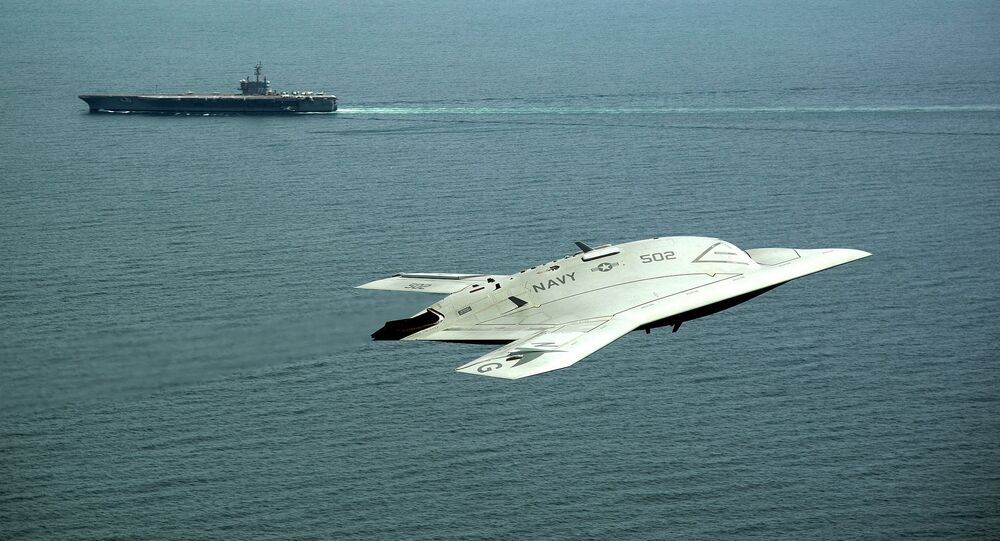 The only thing more terrifying than a US military drone? One that doesn’t need to stop for gas. The Navy’s bat-wing drone, the first capable of launching from an aircraft carrier, can now also refuel in midair.

The X-47B test UAV has completed the first-ever autonomous aerial refueling. Developed by Northrop Grumman, the drone received over 4,000 pounds of fuel from a tanker jet just off the coast of Virginia.

"What we accomplished today demonstrates a significant, groundbreaking step forward for the Navy," Captain Beau Duarte, program manager for the Navy’s unmanned carrier aviation program, said in a statement.

"The ability to autonomously transfer and receive fuel in flight will increase the range and flexibility of future unmanned aircraft platforms, ultimately extending carrier power projection," he added.

© Flickr / Official U.S. Navy Page
The only thing more terrifying than a US military drone? One that doesn’t need to stop for gas.

Yet despite this benchmark, the Navy has no idea what to do with the aircraft. Debate continues in Washington about the future of aerial warfare, and as result, the Navy has put its program on hold. While some are pushing for unmanned aircraft, others are hesitant to move away from manned fighter jets when the US government has spent nearly $1 trillion developing its F-35.

"Unmanned systems, particularly autonomous ones, have to be the new normal in ever-increasing areas," Navy Secretary Ray Mabus said during the Navy League’s Sea-Air-Space 2015 Exposition.

"I am concerned that the current requirements proposed for the Unmanned Carrier-Launched Airborne Surveillance-Strike (UCLASS) program place a disproportionate emphasis on unrefueled endurance to enable sustained ISR support to the carrier strike group," McCain wrote in a letter to Defense Secretary Ashton Carter.

McCain’s concern came after the X-47B’s first successful takeoff and landing from an aircraft carrier. Now that the drone has proven capable of midair refueling, McCain may be less worried about the program’s long-term prospects.