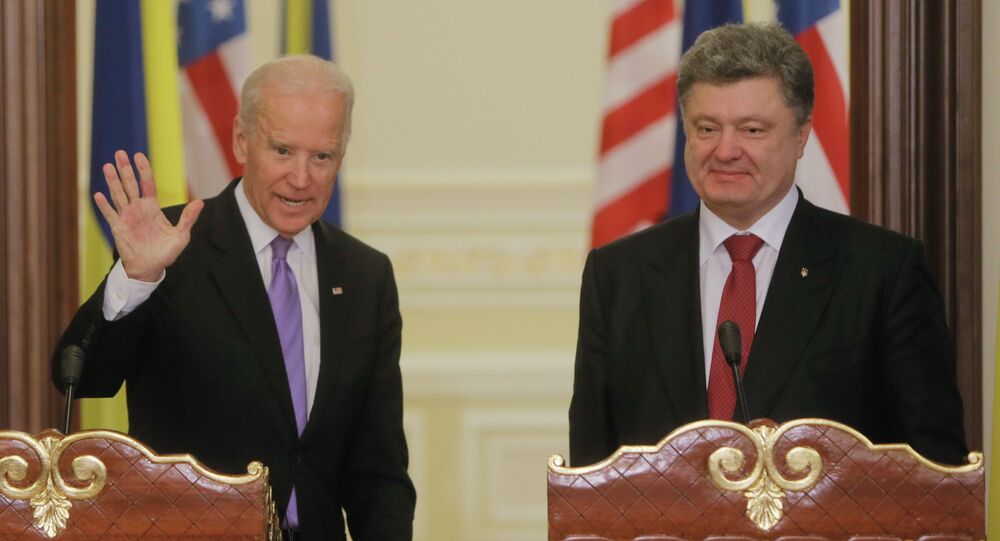 The US agreed on Monday to provide almost $18 million in additional humanitarian aid for Ukraine, including shipments of supplies and funding for projects in areas affected by fighting. Veteran activist Joe Iosbaker spoke with Radio Sputnik about what he thinks this aid really means for the US' role in the region.

Iosbaker is an organizer for the Anti-War Committee and a leader in the United National Antiwar Coalition. He said the aid package is nothing more than a political move.

"That's window-dressing. And of course the loan guarantee, that offer will come with strings. The US will want more of the Ukrainian economy opened up to plunder from the Western financial interests. And that in turn will mean the safety net for workers in Ukraine will be further shredded no doubt."

© AFP 2020 / SERGEI SUPINSKY
US to Provide Additional $17.7 Mln in Humanitarian Aid to Ukraine

Iosbaker explained that no one doubts that the Ukraine economy is in bad shape, the country’s foreign debt reaching over $72 billion in early 2015. But aid, says Iosbaker, isn't the solution.

"Like drugs given to a junkie, the west is just keeping Ukraine hooked on their loans," he said, while better, regionally backed options had previously been available.

"Just a year and a half ago Russia had made an offer to Kiev that was far and away better than the paltry offer being offered to them by the IMF. And the Russian offer didn't come with the demands for austerity that the IMF brought to them."

"The rebels in Ukraine are now in power and they're actually not satisfied with US support for them. The US is sending them 300 troops to train, but they're calling —  the so-called rebels now in power in Kiev — they're calling for the US to give them more weapons. The US did already pledge a billion dollars to NATO to further strengthen itself in Eastern Europe."

"I think all of this is part of the encirclement of Russia, really, that's what it comes down to," in the end, says Iosbaker.

"The United States is having an existential crisis because their world domination — their economic world domination —  is slipping and is slipping faster and faster. And the only they have to try to maintain their status in the world is their superpower status, their military superpower status. It leads them to desperate acts, backing fascists in Ukraine, bombing civilians, you know, supporting the bombing of civilians in Donbass."

Ukraine Should Be Cautious About Banning Communist Party

Over 800,000 Refugees From Ukraine Seek Asylum in Neighboring Countries