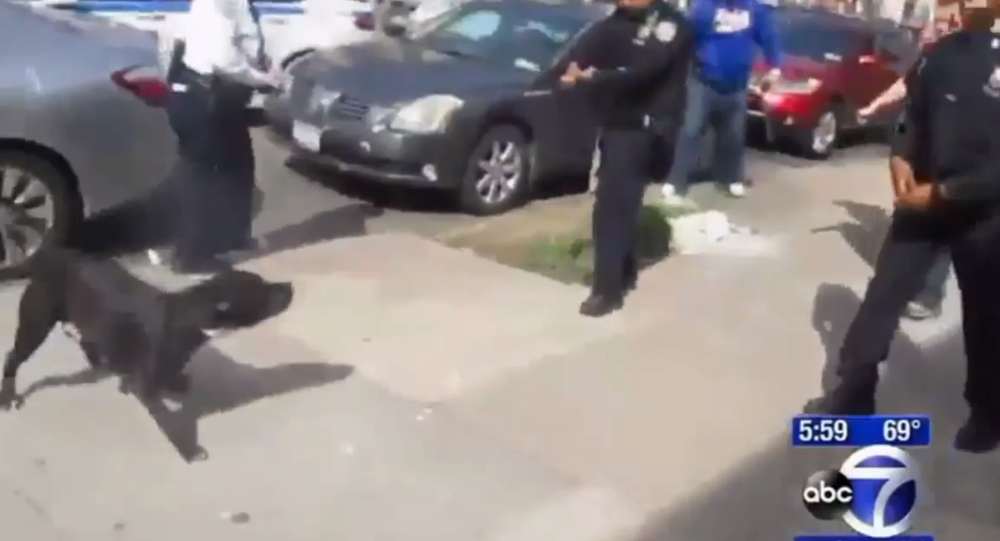 The shocking scene was captured on video by a witness in the Brownsville area of Brooklyn, where a dog was shot at in the middle of a large crowd after police arrived at the wrong home in an attempt to make an arrest.

After the NYPD officers arrived, a crowd gathered to see what was going on.  One witness pulled out a cellphone and began to film the officers.

As police attempted to force themselves into the home, a dog got loose and ran outside to greet everyone.  The dog is seen jumping on officers, but not in an aggressive manner.  Nobody was bit, and no one seemed threatened by the pet.

The fact that this playful pup was not a threat didn’t stop one officer from shooting at the dog at point blank range, however. The officer missed, but witnesses claim that the ricocheting bullet nearly hit a bystander as it bounced off the sidewalk.

"It didn't dawn on me it was a gun…you almost shot me," eyewitness Jason Holley told ABC7.

The angry crowd immediately began to condemn the reckless action, yelling at the police that there were kids in the crowd. One can be heard saying “no, no you wrong. You wrong. You’re dead *expletive* wrong for that.”

Despite the fact that the officers did not find the suspect they were looking for, one person who lived at the house was ultimately arrested for disorderly conduct.  It is unclear whether the alleged disorderly conduct occurred before or after the shooting.

Police in the United States kill a dog on average every 98 minutes.

Two officers were killed by bee stings in 2013, and one even by a cow, but not a single US officer has lost his life at the paws of man’s best friend in the last 50 years.