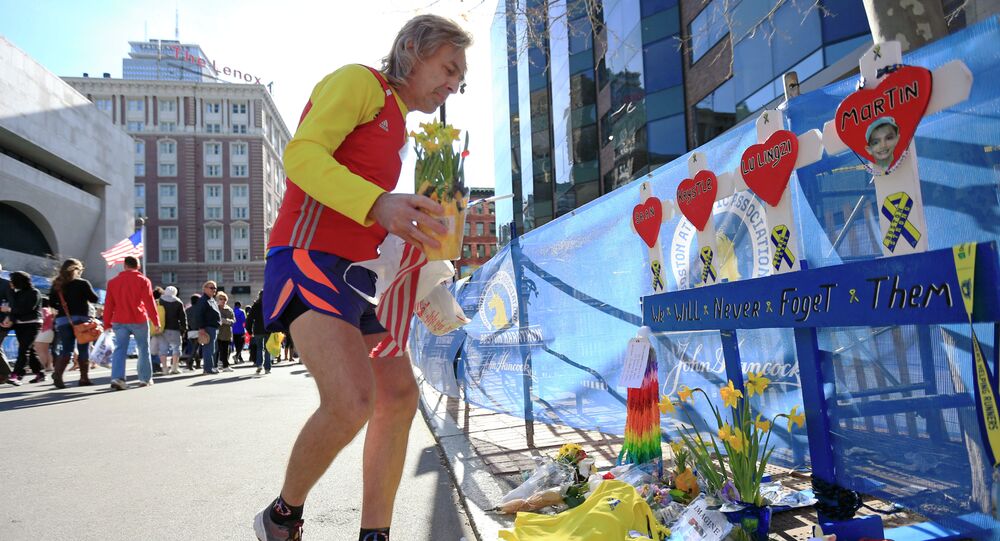 This year's Boston Marathon kicks off with increased security, ahead of the second phase of the Boston bomber trial.

© AP Photo / Jane Flavell Collins
Tsarnaev Trial 'Devastating' - Boston Marathon Bombing Witness
Participants in the Boston Marathon will set off on Monday morning on the 26.2 mile [42.2 kilometer] course around the city, two years after the race was hit by a bomb attack which killed three people and injured 264.

As part of tightened security measures, officials have asked spectators not to bring backpacks, large bags or coolers to the event, and all such items will be searched by event organizers. A warning was also issued against flying any kind of drone or model aircraft along the route, which is expected to attract up to one million spectators.

About 30,000 people will take part in the race throughout various sections, which will begin at 8.50 am with the impaired mobility segment, followed by the wheelchair segment.

"One equal temper of heroic hearts, Made weak by time and fate, but strong in willTo strive, to seek, to find, and not…

Posted by The Boston Marathon on Sunday, 19 April 2015

While reigning women's champion Rita Jeptoo of Kenya is currently banned for having used drugs and will therefore not take part, last year's winner Meb Kefligizhi, the first US male to win the event since 1983, is again participating. Kefligizhi, who will turn 40 next month, became the oldest winner since 1930 when he took first place with a time of 2:08:37.

The running team of the Martin Campbell Foundation, set up in memory of Martin Campbell, an eight-year-old boy who was killed in the 2013 attack, is also joining the race. Members running on behalf of the foundation include his neighbor, his soccer coach and other members of the local community.

© AP Photo / Charles Krupa
Boston Marathon Survivor to Run in 2015 Race
The team are "trying to live out his legacy of no more hurting people, peace and wanting to really help Jane and Henry and the rest of the family move forward and use this as something for good," said Martin's second-grade teacher, Rachel Moo, who will also take part in the marathon.

The jurors in the trial of Dzhokhar Tsarnaev, who last week was convicted of all 30 charges against him in connection with the bombing and its aftermath, have been ordered by judge to stay away from the race, as part of their instructions to avoid events and media coverage related to the marathon.

Also barred from taking part in the marathon is Kendall Schler, the disgraced winner of last week's St. Louis Marathon, who was stripped of the title and barred from Monday's event after it transpired that she had entered the racecourse only after the final checkpoint, before crossing the line with a time of 2:50:30. After an investigation had been conducted by course officials, second-placed Andrea Karl was awarded the winners' medal.