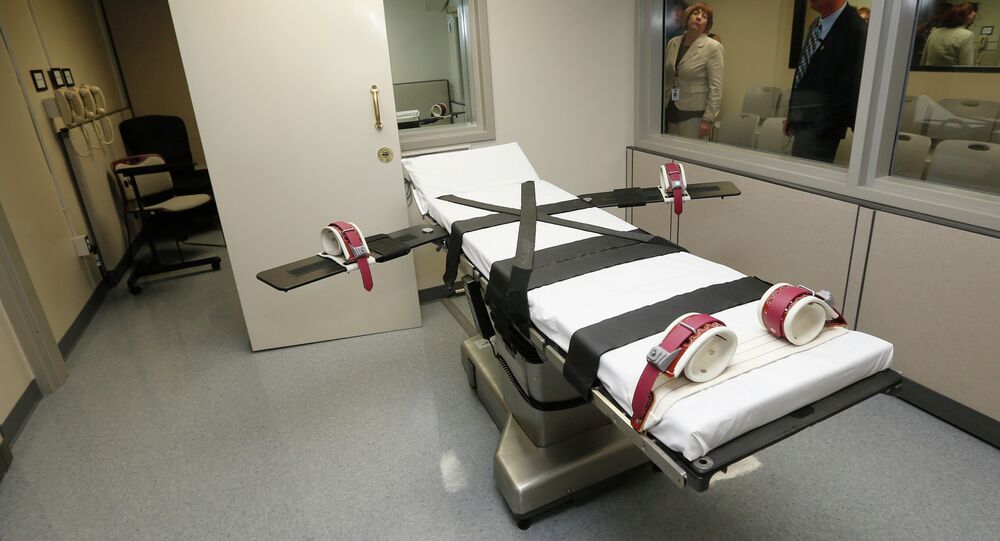 Oklahoma has approved the use of nitrogen gas asphyxiation for the administration of the death penalty in case the US Supreme Court finds lethal injections - plagued by recent botched executions - to be unconstitutional.

Republican Governor Mary Fallin signed the bill into law Friday, which makes it the first state to approve the proposed method. The process would require either a sealed chamber or a special mask for the prisoners to wear as the oxygen they breathe is gradually replaced with nitrogen.

Fallin supports capital punishment and said she believes executions must be performed effectively and without cruelty.

"The bill I signed today gives the state of Oklahoma another death penalty option that meets that standard," the governor said in a statement.

Mike Christian, the Republican state representative who authored the bill, says the procedure would be painless and affordable for the state. Nitrogen is an inert gas, meaning it has no physiological effect on a person who breathes it, so they lose consciousness and subsequently die due to a lack of oxygen.

"Nitrogen induced hypoxia is a painless form of execution that doesn't require any specific pharmaceutical compounds or any medical expertise to administer," Christian told the Tulsa World.  "It is a far better alternative to the electric chair should lethal injection ever become unavailable, and so I thank the governor for signing this bill into law."

When the idea was first floated, the Oklahoma chapter of the American Civil Liberties Union came out against it.

"We would be experimenting on the condemned using a process that has been banned in many states for the euthanasia of animals," said the chapter's executive director Ryan Kiesel.

The search for novel execution methods follows a European-led boycott of chemical manufacturers who refused to supply the US with the traditional cocktail of drugs used in lethal injections. Substitute drugs whose formulas weren't thoroughly tested or even publicly disclosed brought lawsuits over the cruelty of untested chemicals and, in the worst instances, gruesome botched executions.

In particular, the execution of Clayton Lockett in Oklahoma in April 2014 sparked nationwide concern when it took him 43 minutes to die. Witnesses reported that he was moving, groaning, and trying to rise during the process.

Oklahoma isn't the only state whose seen fallout from the drug shortage. Arizona’s only execution from July of the same year made headlines when it took nearly two hours and 15 doses of drugs to execute Joseph Wood, a man convicted of a 1989 murder and assault.

The Supreme Court is currently taking up the issue of whether lethal injection — in particular the use of a sedative called midazolam in the 3-drug process — violates the constitutional prohibition on "cruel and unusual" punishment. They are expected to hand down a ruling this summer.

Utah also went in search of an alternative execution method to replace lethal injection but instead of trying something new, they went for something old — the firing squad. Utah's Republican governor Gary Herbert signed the law in March.

"As a defense attorney, I think that execution by firing squad is cruel and unusual. But as a citizen of Utah, I find it barbaric and embarrassing," Salt Lake City Human Rights Commission member Christopher Wharton told Sputnik when lawmakers first passed the bill.

Meanwhile, opposition to any form of capital punishment has grown in recent years, in part due to concerns about executing the innocent, as several high profile cases have exonerated long-time death row inmates.

On the same day that Utah signed the firing squad bill into law, news broke of an Arizona woman, Debra Jean Milke, whose conviction for the murder of her son was tossed out after she spent 22 years on death row.

US Rights Organization Pushes for Debate on Death Penalty

Utah Citizens Group Pushes to End Death Penalty in US