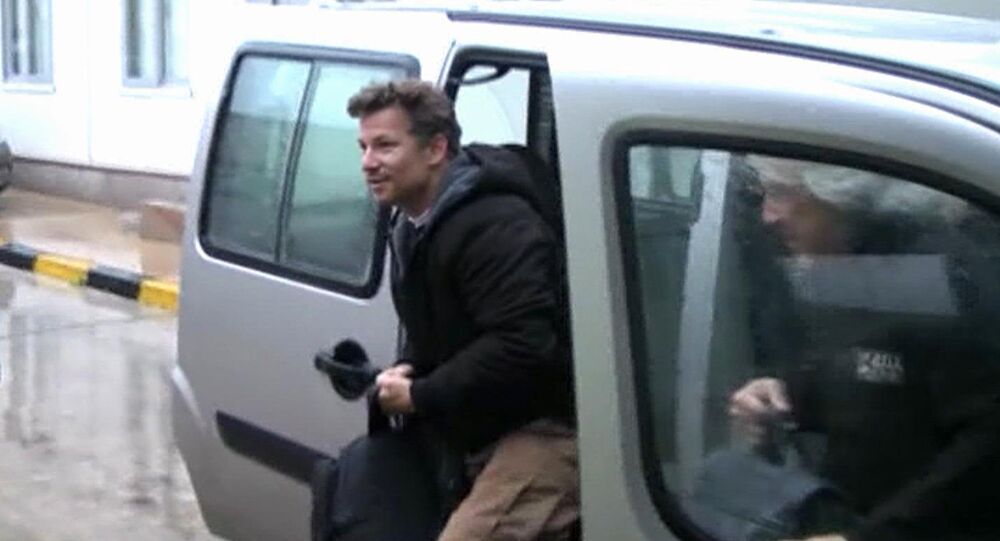 NBC Correspondent Richard Engel has revised his account of his kidnapping in Syria in 2012, now saying the abduction was carried out by none other than those "moderate Syrian rebels" for which the US was debating support. They convinced Engel they were pro-Assad Shiites, and NBC ran with it despite clear indications that it was a ruse.

In a statement posted on NBC News' website on Wednesday, Engel recounts how, two years later, he reexamined the story of his and his crew’s abduction while covering the Syrian conflict, and comes to four basic conclusions about how his original story was wrong:

"The group that kidnapped us was Sunni, not Shia.

The group that kidnapped us put on an elaborate ruse to convince us they were Shiite Shabiha militiamen.

The group that kidnapped us was a criminal gang with shifting allegiances.

The group that freed us also had ties to the kidnappers."

Engel explained why he believed his captors when they said they were part of the the Shabiha militia — Shiite militiamen loyal to Syrian President Bashar al-Assad.

"They spoke in a particular accent, playing Shiite chants on their cellphones, smoking cigarettes, even serving us coffee in cups decorated with Shiite symbols. I, along with two other Arabic speaking members of our six-member team, believed they were from the Shabiha."

No one so far is levelling accusations that Engel is lying about this belief, formed during a five-day ordeal in which he and the rest of the crew were mistreated, threatened with death, and psychologically tortured.

"It Is So Clearly a Set Up"

However, not everyone at the time was fooled, and plenty of observers questioned the plausibility of the kidnappers being pro-Assad Shiite militiamen. Nevertheless, NBC rushed Engel to air to repeat a story that reinforced a narrative about who the "bad guys" were in Syria at a moment when the United States was debating whether and how to get involved in the conflict.

Among those who now get "I told you so" rights over Engel's story is As'ad AbuKhalil, a California State University, Stanislaus professor who blogged openly about his, and others' doubts about the identity of the kidnappers.

Commenting on a video of the captives that had been released, showing walls covered in spraypainted slogans, AbuKhalil wrote that it was all a bit too perfectly convincing.

"It is so clearly a set up and the slogans are so clearly fake and they intend to show that they were clearly Shiites and that they are savages. If this one is believable, I am posing as a dentist."

AbuKhalil cited an account from a "reputable Western journalist" working in Syria who asked for anonymity and described a well-known and repeated pattern of rebel groups perpetrating kidnappings for ransom and trying to pin the blame on regime loyalists.

"[E]very time a journalist gets kidnapped in Idlib at first the opposition activists blame Shiites or even Alawites (!) as happened three weeks ago with a different group."

People inside NBC as well, not just outside commentators, suspected involvement of the Free Syrian Army — even while the kidnapping was still going on.

Writing at the Daily Beast shortly after the group was freed, Jamie Dettmer interviewed members of the security services who worked to rescue the crew, on condition of anonymity, who said NBC itself had reason to doubt the kidnappers were Assad loyalists.

"NBC’s security advisers were convinced that there was some FSA involvement in this and contacted wealthy Syrian-American donors of the rebel group, pointing out that Richard had been supportive of the uprising against Assad. They urged them to put pressure on the FSA. They really screwed down on them," Dettmer's source said.

Indeed, a thorough investigation published Wednesday by the New York Times — whose questions spurred Engel's own look back into the events — concluded that the NBC group was kidnapped by a Sunni criminal gang associated loosely with the FSA.

"The group, known as the North Idlib Falcons Brigade, was led by two men, Azzo Qassab and Shukri Ajouj, who had a history of smuggling and other crimes," the Times reporters found. "The kidnapping ended, the people involved in the search said, when the team was freed by another rebel group, Ahrar al-Sham, which had a relationship with Mr. Qassab and Mr. Ajouj."

The rescue of the prisoners was essentially staged. In Engel's original account the group fortuitously came up against a rebel checkpoint and were freed in an ensuing firefight. However, the kidnappers and rescuers now appear to have colluded, to save face.

A detail from Engel's account that contradicted the idea of a collusion was also shown to be the product of at least one admitted instance of bad journalistic practice. He originally said that the checkpoint rebels killed members of the kidnapping group and that he had seen the bodies, which would hardly be plausible if they were in league. It turns out Engel never saw the body himself.

"A bearded gunman approached and said that we were safe now," Engel's updated statement reads. "That was our introduction to Abu Ayman. He said that he and his men had killed the two kidnappers. Under the circumstances, and especially since Aziz said that he had seen and stepped over a body, I didn't doubt it and later reported it as fact." [Emphasis added]

NBC, despite previous well-founded suspicions, also chose to let Engel make all the television news rounds and continue to report it all as fact, reinforcing the description of a political landscape including bad pro-Assad forces who kidnap journalists and good moderate FSA fighters who rescue them.

Details of the kidnapping even conveniently played into fears of Assad regime collaboration with other US enemies, as when Engel explained on an appearance on the Rachel Maddow show on Dec. 18 why he thought his captors were Shahiba militiamen.

"They were talking openly about their loyalty to the government, openly expressing their Shia faith. They are trained by Iranian revolutionary guard. They are allied with Hezbollah," Engel said.

Compared to NBC's recent embarrassment over Brian Williams fabricated tales of wartime danger, the willful suppression of the network's own knowledge of probable FSA involvement is "a huge journalistic scandal," writes Glenn Greenwald at the Intercept, "on the level of Iraqi aluminum tubes."

AbuKhalil, in an email to the Intercept, agrees, and says it was no accident.

"This is a culture: they all were part of a charade to promote and champion the Free Syrian Army when that very army was kidnapping innocent Lebanese Shi'ites and killing people on sectarian grounds. They didn't want to believe it."