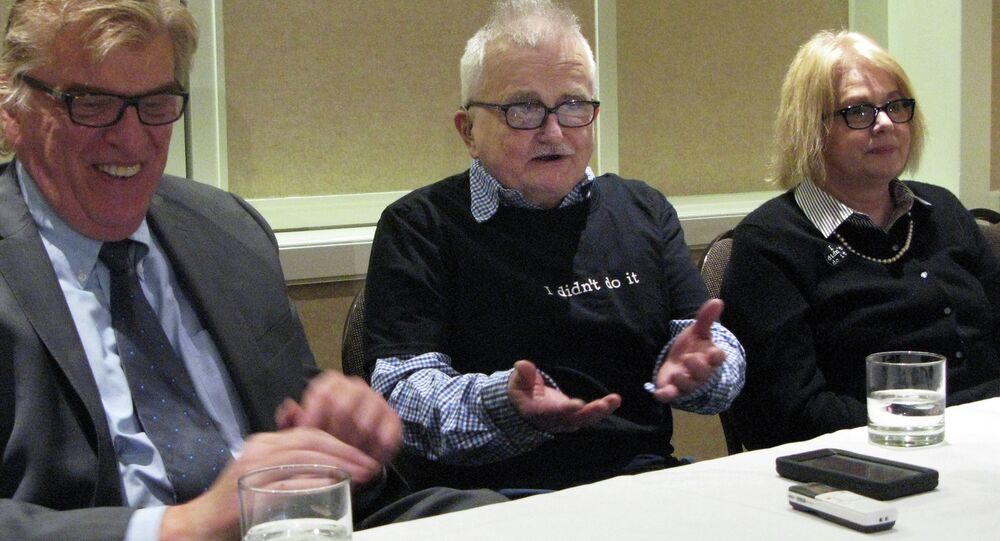 A 69-year-old man who suffers from a syndrome that affects brain development and causes intellectual impairment, was freed on Friday after spending 26 years in prison for murder and rape. A court determined his confession had been made under duress and that he was not given a fair trial.

Accompanied by his attorneys, Richard Lapointe, who had confessed to raping and killing his wife’s elderly grandmother and was sentenced in 1992 to to life in prison without parole, came out of the Hartford Superior Courthouse wearing a T-shirt that said “I didn’t do it” in large letters.

“Of course I didn't do it,” he said, happily as his supporters cheered on. "I feel wonderful."

© AP Photo / Pat Eaton-Robb
Attorney Paul Casterleiro, left, shows the features of an iPhone to Richard Lapointe, who was freed on bond after 25 years in prison, Friday, April 10, 2015, in Hartford, Conn. The mentally disabled convict was released following a court order for a redo of a murder trial that condemned him on the basis of a disputed confession.

Last month, the state’s Supreme Court ruled that his original confession to the rape and murder of  88-year-old Bernice Martin was gained after a nearly 10-hour police interrogation and thusly was made under duress. The ruling determined he was not given a fair trial, because the prosecutors did not disclose evidence that supported his alibi at the time.  The court ruled Laponte be released or given a new trial, and on Friday Superior Court Judge Joan Alexander order him freed on $25,000 bail.

Lapointe suffers from Dandy-Walker syndrome, a congenital brain malformation that inhibits  intellectual and physical development.  His supporters claim that, because of this impairment, it would be impossible for the former dishwasher to have committed the crime.

They say that the lengthy police interrogation a quarter of a century ago, in which he likely did not fully understand what was going on, garnered the contentious confession.

Judge Alexander also rejected the prosecutor’s request for Lapointe to wear an ankle bracelet on the grounds that he was a flight risk.  Defense attorneys successfully argued the man could barely walk.

© CC BY 2.0
$20Mln Wrongful Conviction Settlement in Illinois Largest in US History

Other than craving a nice juicy steak upon release, Lapointe also expressed much surprise that his favorite baseball team the Boston Red Sox had won the world series while he was in prison.

"You gotta be kidding me. They finally got good?” he said.

"He is a relatively simple man of simple needs,"  Defense Attorney and legal non-profit Centurion Ministries member Paul Casteleiro told the Hartford Courant, "He is supported by a large group of people who have grown up around this case. It is my opinion that he is absolutely innocent and he doesn't represent a threat to anyone."

Connecticut Man Who Wrongfully Spent 21 Years in Prison Gets $6M