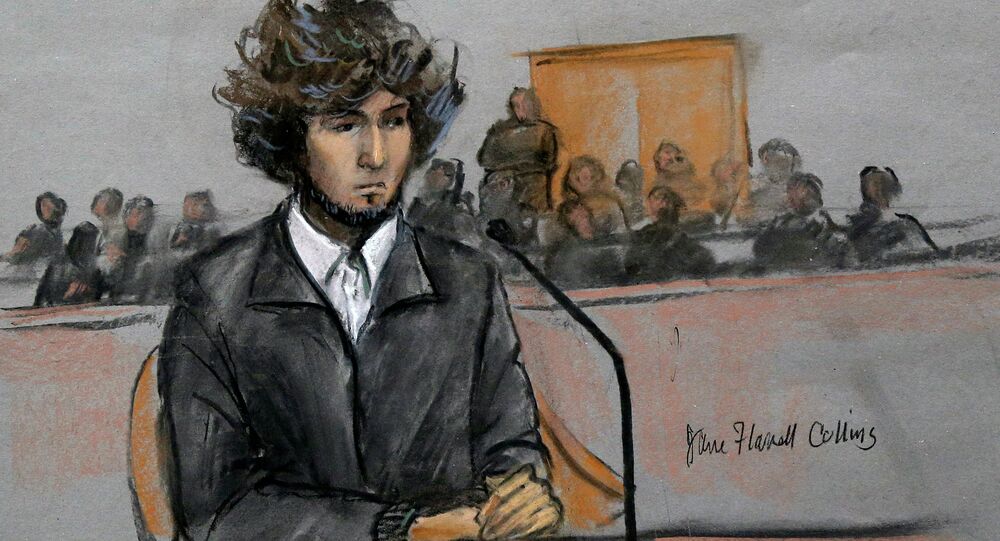 Lawyers for Boston bomber Dzhokhar Tsarnaev are set to deliver their closing arguments on Monday.

© Sputnik / Pyotr Martynytchev
Boston Residents Against Death Penalty for Marathon Bomber Tsarnaev - Poll
The jurors in the trial of Boston bomber Dzhokhar Tsarnaev will retire to consider their verdict today, after hearing the closing arguments from government prosecutors and from Tsarnaev's defense; the latter hope to spare the 21-year-old from the death penalty on the grounds that he was led to commit to the attacks by his older brother.

The federal court in Boston has heard from 96 witnesses since the trial began on March 4, when defense attorney Judy Clarke told the jury in her opening statement that "it was him," who was responsible for the "senseless, horrific, misguided acts" of April 15, 2013, when Dzhokhar and his older brother detonated an explosive which killed three people and injured 260 other spectators who were watching the Boston Marathon.

"It was Tamerlan Tsarnaev who self-radicalized. It was Dzhokhar who followed," said Clarke, whose client is facing 30 federal charges over the attacks, 17 of which carry the possibility of the death penalty.

In his opening statement to the jury, US prosecutor William Weinreb depicted Dzhokhar as an active and enthusiastic participant in the bombing, who had a collection of magazines published by al Qaeda, including those with instructions on how to make bombs, listened to jihadi material and posted messages online espousing radical Islam.

© AP Photo / Brian Blanco
US Islamic Group Sues FBI for Killing of Tsarnaev's Friend
Clarke is looking to persuade the jury that 21-year-old Tsarnaev was led by his older brother Tamerlan to carry out the bombings of April 2013, when two home-made pressure cooker explosives planted by the brothers exploded close to the finish line.

As well as the bomb charges, Dzhokhar faces charges related to a shootout with police after the attacks, and the subsequent execution of an MIT police officer shot by the brothers while he was sitting in his patrol car. His brother Tamerlan, 26, died in the shootout, four days after the bombings.

State prosecutors, who rested their case last Monday after calling 92 witnesses to the stand including maimed survivors of the attack, are seeking to convince the jury that the brothers, who immigrated to the USA in 2002 from Kyrgyzstan, were both active and willing participants in the attack.

Tsarnaev's defense rested its case on Friday after calling four witnesses. After Monday's summing-up, the jurors will first deliberate Tsarnaev's guilt regarding the 30 charges, and then return to determine if Tsarnaev should face the death penalty or life in prison.