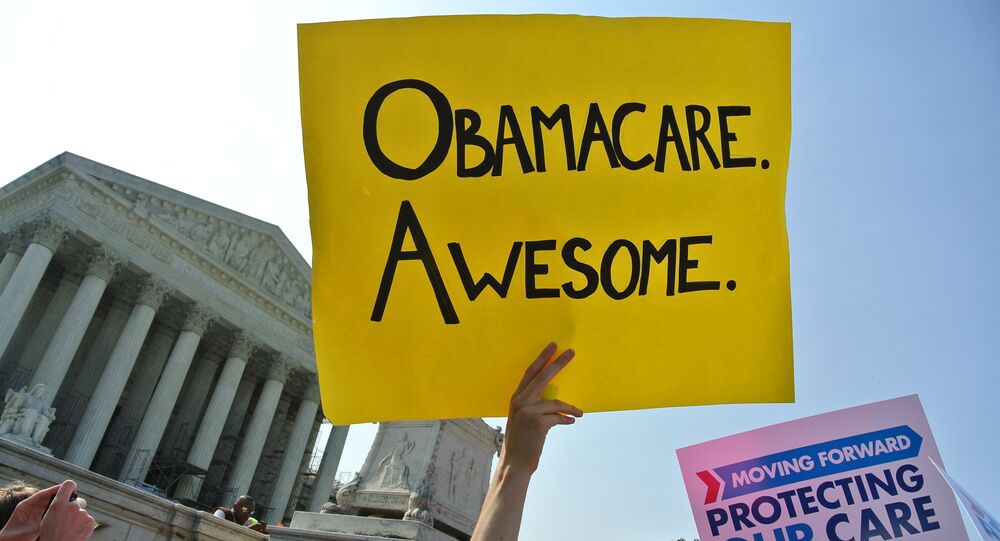 Obamacare has helped expand the lifespan by 13 years and decreased the number of preventable patient deaths, according to the White House.

© AP Photo / Jon Elswick
US Senate Divided About Obamacare’s Five-Year Results
WASHINGTON(Sputnik) — The Patient Protection and Affordable Care Act, or Obamacare, has been in place for five years and is working better than the US government anticipated, US President Barack Obama said on Wednesday.

“It’s working better than many of us, including me, anticipated,” Obama said at an event marking the fifth anniversary of Obamacare at the White House.

The President noted that prior to the introduction of Obamacare in 2010, the United States had an inefficient and wasteful healthcare system that did not always deliver the needed quality care.

Obamacare reduced hospital readmission rates dramatically, according to the White House. Additionally, there were 50,000 fewer preventable patient deaths and lifespan expanded by 13 years since the law was implemented.

© REUTERS / Ints Kalnins
Erdogan Assumes His Inspiration Prompted US President to Initiate Obamacare
About nine million US seniors and people with disabilities have saved $1,600 on their prescriptions on average, or more than $15 billion in total, Obama explained.

The President also said the ranks of uninsured people dropped by one third since 2010, but added that the number of Americans without insurance coverage will double if the US Congress passes the Republican budget for 2016 that repeals Obamacare.

“We’ve made our share of mistakes since we passed this law, but we also know… that the policy has worked,” Obama said.

Members of the US Senate are still divided over the outcomes of Obamacare.

© REUTERS / Jonathan Ernst
Obamacare 'Wreaking Havoc' on US Taxpayers - Boehner
Republicans argue that despite the President’s promises, Americans were not able to keep their original healthcare plans or their doctors, and taxpayers continue to be hit by rising costs, decreased quality of care and less healthcare providers choices.

At present, two US government programs implemented through Obamacare, Medicare and Medicaid, provide insurance to 123 million US citizens, according to the White House.