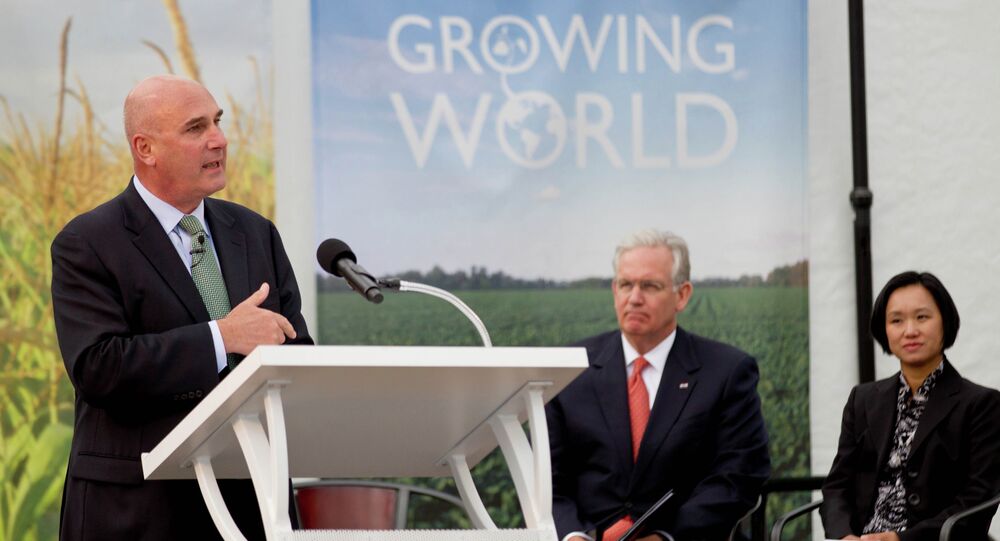 Monsanto has long been the target of outcry for many opposed to genetically modified foods. In a new interview, the company’s CEO blames the GM debate on Monsanto’s own failure to adequately promote the technology, and insists biotech is the only way to feed a starving world.

"There never had been a lot of trust companies, particularly not big companies and certainly not big American companies," Monsanto CEO Hugh Grant (no, not that Hugh Grant) said during a recent interview with the Independent.

Public mistrust of corporations can stem from totalitarian legal practices, of which Monsanto is guilty of many. The agrochemical giant has a long history of suing the little guy, mostly poor farmers who may have used Monsanto seeds without permission.

But Grant is mostly referring to his company’s failure to appreciate the public’s concern over consuming genetically modified foods. 20 years ago, Monsanto introduced the world’s first GM seeds, biology artificially altered to grow faster and stronger. An idea that leaves many consumers deeply uncomfortable.

"We were so far removed from the supermarket shelf, that was never something we gave a lot thought to. We never thought about our place in the food chain," Grant said of the unanticipated public debate that arose and continues today. "Hubris and naivety. They are sort of opposite sides of the same coin. We did really cool science and we worked within global regulatory requirements. From where we were the conversation with consumers was an abstract."

Much of that debate centers on concerns that Monsanto’s products pose environmental and health concerns. Last month, an environmental group sued the US Environmental Protection Agency over its failure to properly regulate Roundup, an herbicide produced by Monsanto. That suit alleges that Roundup is responsible for devastating effects on wildlife, in particular the monarch butterfly population.

On Saturday, a study conducted by the International Agency for Research on Cancer published a report which found limited evidence suggesting that glyphosate – an active chemical in Roundup – could be carcinogenic.

After a series of unapproved Monsanto seeds mysteriously found their way onto a farm in Oregon, several nations tightened its control of wheat imports, including Japan, South Korea, and the European Union.

Grant insists that many of these fears are unfounded, and even with all of these setbacks and continued public resistance to genetically modified products, he maintains that biotech is crucial.

"If you look at [farming] growth in the last 15 years, about 70% came from new land cultivation," he told the Independent. "When you go from six to nine billion over the next 30/40 years there is no new land. Can you do it without biotech? I don’t think so."

He stressed that because GM could be so crucial to the future, the debate should focus on finding solutions, rather than banning genetically modified food altogether.

"There is a middle ground in all this and if the shrill noise could die down my hope is there is an opportunity to engage in this," Grant said. "Maybe this is optimism but I think there is a chance that we are going to look back fondly and say, 'God – some of those arguments. They were intellectually interesting but practically ridiculous'."

At the risk of falling back into the hubris trap, Grant added, "The thing that often frustrates me in the debate is that there is never an alternative…The other side of this is still pretty empty."