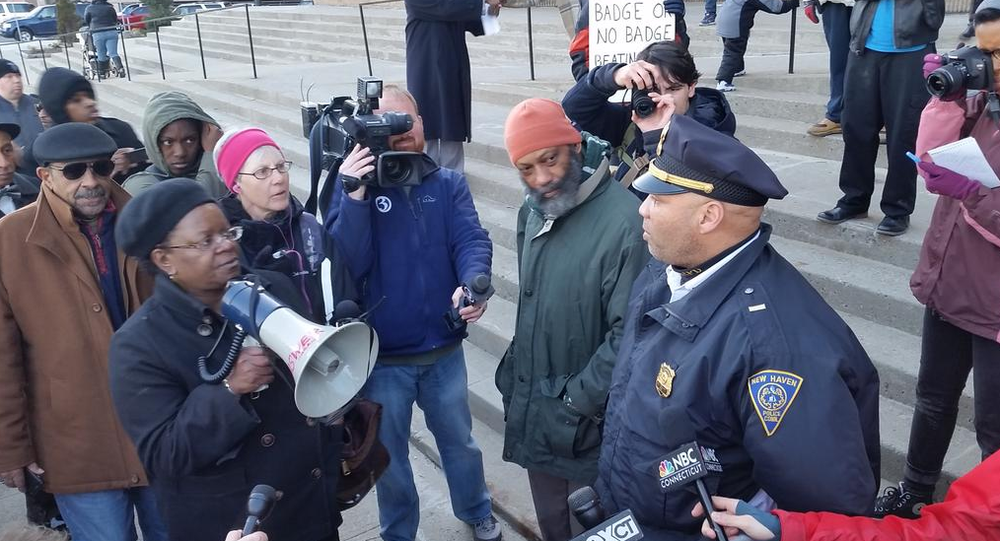 Protesters marched through the streets of New Haven, Connecticut on Monday, in response to the latest example of police brutality against minorities: the violent arrest of a teenage girl.

On March 15, New Haven police responded to a call about a fight which broke out during the St. Patrick’s Day parade.

That violent riot turned out to be a pair of teenagers fighting inside a Buffalo Wild Wings. A white officer arrested black 15-year-old Teandrea Cornelius outside, and in a grown man’s desperate attempt to control a young girl, the officer threw Cornelius to the ground, smashing her face against the snowy curb.

According to Valerie Boyd, the girl’s mother, Cornelius was taken to the hospital and treated for a concussion, swollen eyes, and a fractured shoulder.

"It's a shame that we have officers on the force that would take the type of action they did against a child," Anna Boyd, the girl’s grandmother, told WTNH.

Video of that incident, shot by a bystander, surfaced last week, and on Monday evening a crowd of nearly 50 protesters marched several miles from Cornelius’s home to police headquarters. After gathering around the building, protesters made their way inside.

While police maintain that Cornelius was armed with a knife, protesters argue that the officer’s handling of the event was uncalled for, and unnecessarily violent.

"They’re supposed to protect and serve us," Protest organizer Barbara Fair told WTNH. "That 15-year-old never should have gotten body slammed, fractured her shoulder and scarred up her face. For what?"

In part, the frustration centers around the fact that the officer involved, Josh Smereczynsky, is still on active patrol. While the police department insists that an investigation into Smereczynsky’s actions is under way, protesters say he should, at the very least, be temporarily suspended.

"He should be on desk duty," one protester shouted.

Organizers have another demonstration planned for Tuesday evening, this time in front of City Hall to demand answers from Mayor Toni Harp.

"We need accountability by police," Dori Dumas, president of the local NAACP chapter, told Reuters. "That's what this protest is all about."

Cornelius was charged with possession of a deadly weapon, third-degree assault, and breach of the peace. She has been released on a promise to appear in court.

This is just the latest round of protests in New Haven. In December, the city saw even larger crowds in response to the police killings of Michael Brown and Eric Garner. Last August’s shooting death of Brown, an unarmed black teenager, sparked a series of nationwide protests. Public outcry was reinvigorated after grand juries failed to indict the officer involved in Brown’s death, as well as those responsible for the strangulation of unarmed Staten Island resident, Eric Garner.