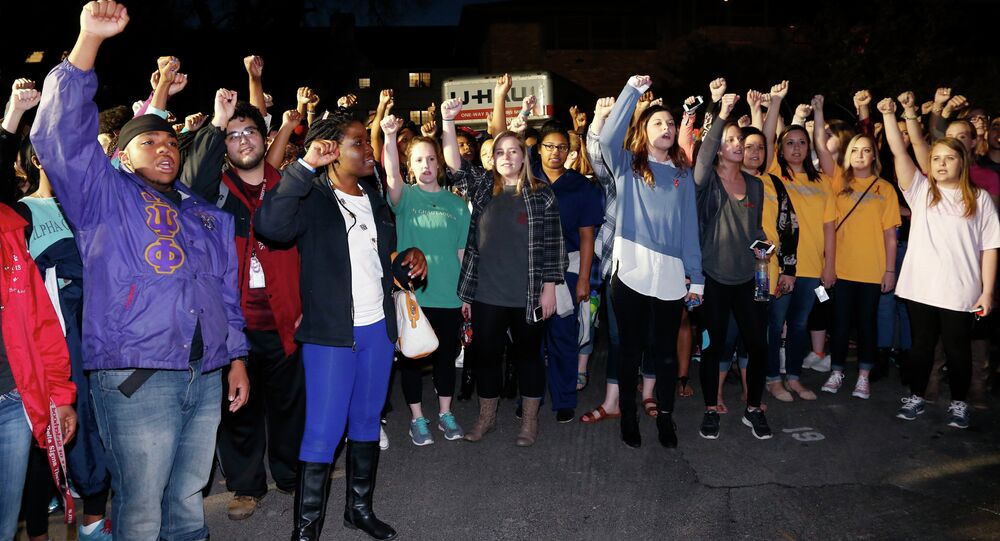 Oklahoma University Scandal Reveals Campus Discrimination Is Rife Across US

The University of Oklahoma was in the spotlight since a video was released last week showing Sigma Alpha Epsilon fraternity members in a bus clapping hands and singing that no black students would be ever allowed in the fraternity.

© Flickr / Billy Adams
University of Oklahoma Branch Closed Over Racist Video
MOSCOW (Sputnik) — The recent scandal over a video that showed white fraternity members at the University of Oklahoma singing a racist chant has made a number of US colleges pledge to combat racism with some undertaking more extravagant steps.

The University of Oklahoma has been in the spotlight since a video was released last week showing Sigma Alpha Epsilon fraternity members in a bus clapping hands and singing that no black students would be ever allowed in the fraternity.

The scandal was followed by an anti-racism march on the university campus and the students shown in the video have been expelled.

In addition, the fraternity's Executive Director Blaine Ayers announced on Wednesday a strategy to combat racial intolerance in Sigma Alpha Epsilon. The measures include hiring a director on diversity and inclusion, requiring members to participate in a diversity education program and creating a hotline for students to report troubling behaviour.

The current scandal is at least the third major discrimination incident in US universities since the beginning of 2015.

Earlier in March, US media reported the story of Rachel Beyda who was deemed unqualified to join UCLA’s student judicial board simply for being Jewish. As documented in a protocol on the University’s website, the board asked Beyda how she would be able to maintain an unbiased stance given the fact she is “very active in the Jewish community.”

© Flickr / tylerphotos
University of Oklahoma Students Protest Fraternity Following Racist Video
Also in March, The Crimson White, a University of Alabama student newspaper reported that a sorority member was expelled from the organization and faces being expelled from college over sending a racist Snapchat message.

Student racism is not exclusive to the higher education system in the US. Last Friday, a video posted on YouTube showed the vice-principal of Fresno’s Scandinavian Middle School in California telling a student that he “just don’t like the black kids.”

The scale of the problem is reflected in official figures. Earlier this week, the US Department of Civil Education said it plans to expand its civil rights division by 30 percent due to a dramatic increase in its workload. The number of complaints from US students from kindergarten to college level, over discrimination on grounds of race, sex and disability grew from 6,364 in 2009 to 9,989 in 2014.