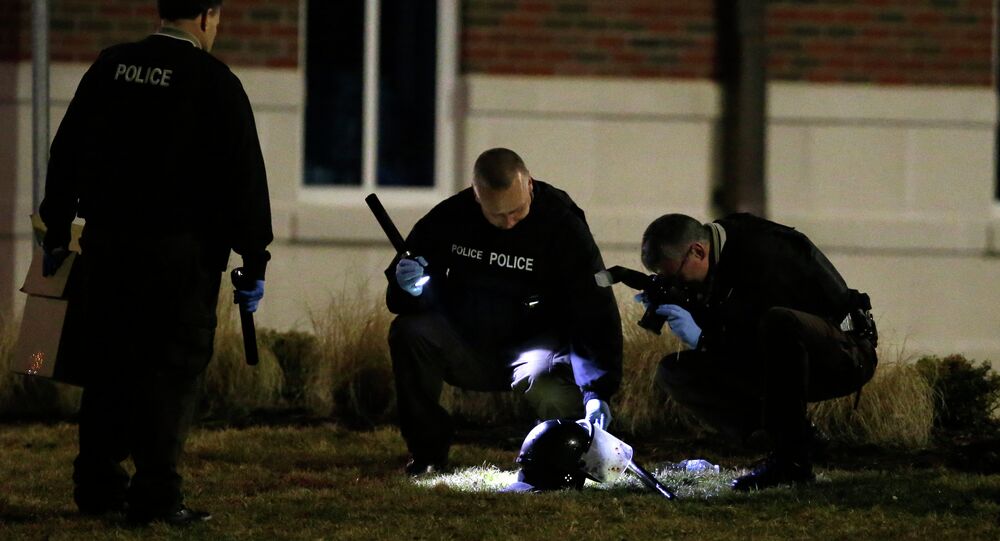 More violence erupted in Ferguson, Missouri early Thursday morning. Protesters gathered outside of police headquarters in the wake of the resignation of the city’s police chief. Shots were fired shortly after midnight, and two officers were shot.

One of the policemen, a 32-year-old officer from nearby Webster Groves, was struck in the face, while another 41-year-old from St. Louis County was shot in the shoulder. Both men were hospitalized. Police Chief Jon Belmar said the officers were conscious, but suffering “serious” injuries.

According to Reuters, both officers have been released from the hospital.

St. Louis County Police
Scene of the shooting
“I don’t know who did the shooting, to be honest with you,” Belmar said during a news conference, though he expressed his belief that “these shots were directed exactly at my officers.”

The video shows a frightening scene. Shots can be heard, followed by panicked screaming.

Twitter
Ferguson
“Acknowledgement nine months ago would have kept that from happening,” an unidentified man can be heard shouting.

The city of Ferguson has been the site of protests since last August, when unarmed black teen Michael Brown was shot by Ferguson police officer Darren Wilson. A grand jury’s failure to indict Wilson in the shooting outraged a public who saw Brown’s death as emblematic of larger racial problems within the police department.

Marciay Pitchford, who was present at the scene, told the AP that protests had been peaceful before the shooting began.

© AP Photo / Jeff Roberson
Police and protesters square off outside the Ferguson Police Department, Wednesday, March 11, 2015, in Ferguson, Mo
© REUTERS / Kate Munsch
Protestors block a police vehicle from entering the City of Ferguson Police Department and Municipal Court parking lot in Ferguson Missouri, March 11, 2015
“I saw the officer go down and the other police officers drew their guns while other officers dragged the injured officer away,” Pitchford said. “All of a sudden everybody started running or dropping to the ground.”

In response, heavily armed police officers circled the department headquarters and blocked off the street with over a dozen squad cars.

While the Justice Department declined to press charges against Wilson, a separate DOJ investigation found widespread racism within the department. Primarily, the investigation found that Ferguson unfairly ticketed its minority population, revenue from minor traffic offenses making up a large portion of the city’s budget.

This report forced Police Chief Thomas Jackson to step down from his position.

Jackson had been heavily criticized for his handling of both the Brown shooting and the aggressive police reaction to protests that followed. As part of his resignation deal, Jackson will receive one year’s salary, nearly $96,000, from the city, as well as health care.