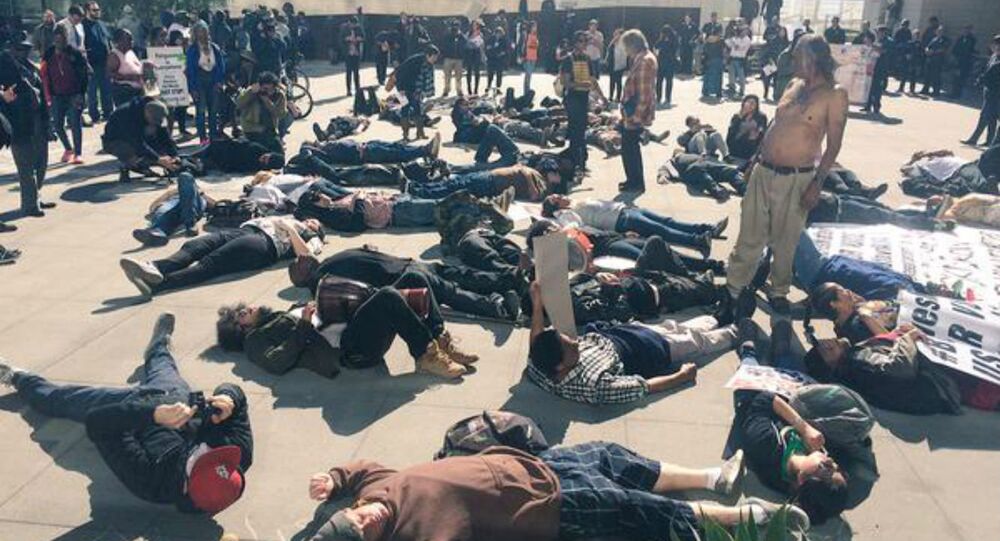 Hundreds of protesters marched to the Los Angeles Police Department (LAPD) on Tuesday to protest the fatal shooting of an unarmed homeless man.

Demonstrators held a moment of silence in honor of the man, known as "Africa," who was killed by police on Skid Row on Sunday.

Two protesters were arrested for disturbing the peace and refusing to leave a public space, LAPD officer Jack Richter told Sputnik, adding that demonstrators left "profane" messages to the LAPD written in chalk outside the department's headquarters.

Protesters chanted “They can’t kill Africa!,” as they marched from the site of the shooting to the police department.

One woman urged cops to find another way to deal with conflict.

"There's too many of these going on," Tina Medina, 57, said. "If there's conflict, find some other way. That's someone's son."

Many demonstrated staged a "die-in" in front of the building to show solidarity with “Africa.”

Police officers lined up, directing traffic while the group headed toward the downtown police administration building to meet with the Police Commission.

"Africa," whom the Los Angeles Times identified as 39-year old Charley Saturmin Robinet, a French national linked with numerous bank robberies, was shot near a downtown homeless shelter on Sunday.

On Monday, a memorial sprung up where the shooting occurred with many placing white roses over his tent, blankets and clothing.

The shooting was captured on video, but the details remain unclear.

Police are still conducting an investigation.  The officers involved in the shooting have been placed on administrative leave.