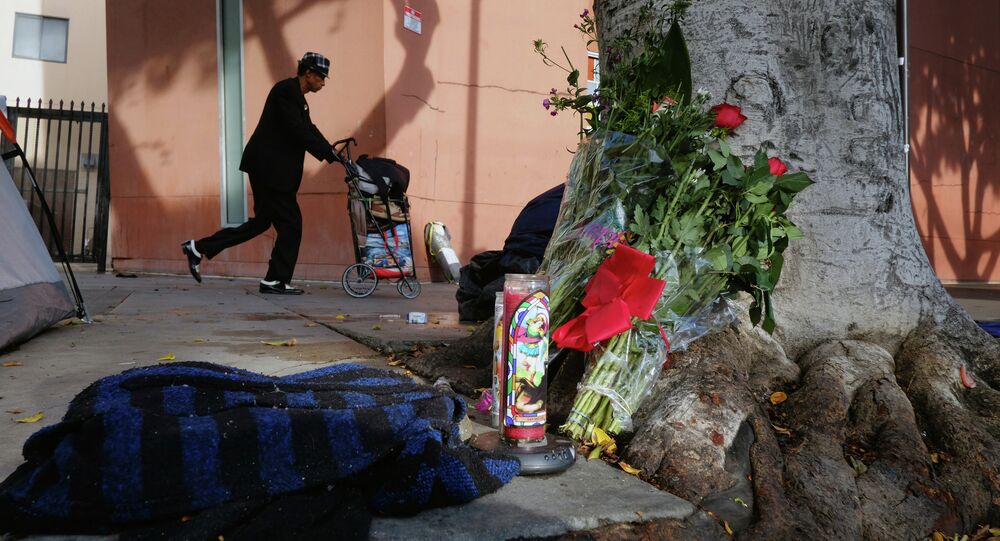 The homeless man who was shot dead by Los Angeles Police Department officers right after he got hold of a law enforcer's weapon was an African-American, Cmdr. Andrew Smith with the LAPD Media Relations told Sputnik on Monday.

© East News / Danny Moloshok
LAPD Braces for Protests Following Shooting of Homeless Man
MOSCOW (Sputnik), Alexander Mosesov — A video of a man shot dead by LAPD officers in the Skid Row area of downtown Los Angeles during an altercation was published online on Sunday. Previously the media made assumptions regarding the race of the victim based on the low-quality video.

Another officer at the media relations section told Sputnik on the matter that a special meeting will be soon held at LAPD where the participants "should figure out whether they're going to put out any more information."

"If they do, they'll give out a press conference," the officer added.

© East News / AP/FOTOLINK
To Protect and to Serve? LA Police Brutally Beat, Kill Homeless Man (VIDEO 18+)
The fatal shooting of a Los Angeles African-American homeless man by police was recorded on video by two police body-cameras, the LAPD said on its Twitter account.

“[The] incident was captured on video, including 2 body-cameras on officers at [the] scene,” the LAPD wrote on Monday.

The LAPD called the killing an “extreme tragedy,” and called on anyone who may have saw, heard or recorded the shooting to contact the local police department.

On Sunday, a video of a man who was shot dead by LAPD officers in the Skid Row area of downtown Los Angeles was published online.

The man “forcibly grabbed” one of the several police officer’s holstered guns which resulted in an officer involved shooting (OIS), according to the LAPD.

The Los Angeles shooting is the latest in a series of controversial incidents regarding US police officers' excessive use of weapons leading to fatal casualties.

The country has seen waves of protests calling for police accountability and racial justice since summer 2014, when black men, Eric Garner and Michael Brown, were killed by white police officers in separate incidents in New York City and Ferguson, Missouri.