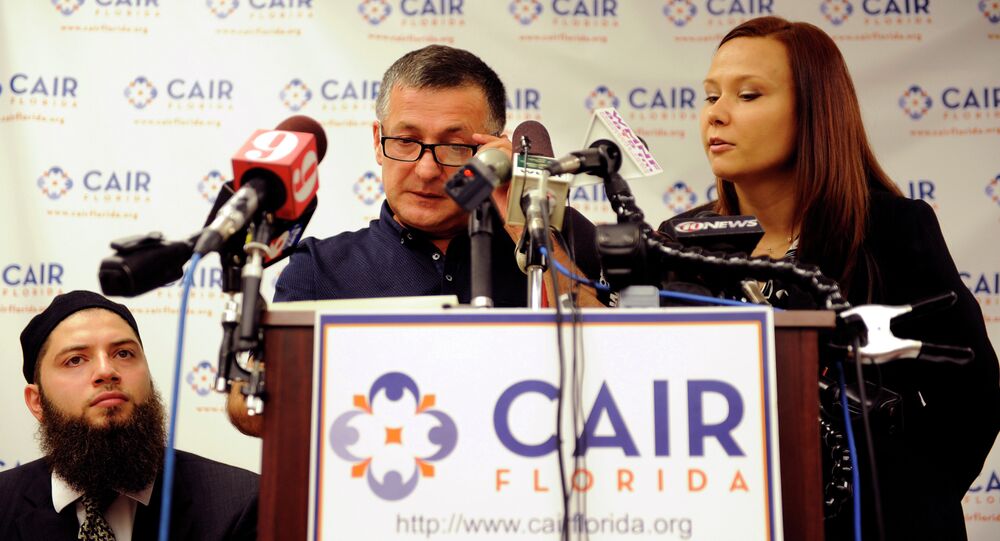 US Islamic Group Sues FBI for Killing of Tsarnaev's Friend

The Council on American-Islamic Relations (CAIR-Florida) is suing the FBI over the killing of Ibragim Todashev, who was a friend of Boston Marathon bombing suspect Tamerlan Tsarnaev during an interrogation.

WASHINGTON (Sputnik) — The Florida branch of the Council on American-Islamic Relations (CAIR-Florida) is suing the US Federal Bureau of Investigation (FBI) over the fatal shooting of Ibragim Todashev, a friend of Boston Marathon bombing suspect Tamerlan Tsarnaev, during 2013 interrogation, according to a statement by CAIR-Florida on Monday.

© AP Photo / Jane Flavell Collins
Friend of Boston Marathon Bombers May Be Acquitted – US Defense Lawyer
"We are seeking answers and justice for someone who was shot seven times by an FBI agent in his own home after hours of interrogation," CAIR-Florida Civil Rights Director Thania Diaz Clevenger said in the statement.

The FBI agent Aaron McFarlane shot and killed Todashev in May 2013 after an FBI interrogation at his residence in Orlando, Florida.

Todashev allegedly confessed during the interrogation that he was involved with Boston Marathon bombing suspect Tamerlan Tsarnaev in an unsolved triple homicide in Waltham, Massachusetts in September 2011.

McFarlane was cleared of any criminal wrongdoing after a Florida prosecutor and the US Justice Department ruled separately that the FBI agent acted in self-defense when Todashev allegedly attacked FBI agents.

“The murder of our son is unjust and is a result of the FBI's abuse of their power. Today, together with CAIR Florida, we are starting a process that will bring, as we hope, justice to our son, our family, and our world. We expect that the FBI agents that murdered our son will be held accountable,” Todashev’s family said.

The American Civil Liberties Union (ACLU) sued the FBI and US Attorney’s office in 2014 to obtain documents from the US state of Massachusetts Joint Terrorism Task Force inquiry into the Boston Marathon bombing. The complaint requested information about Todashev’s case and the Waltham murders.

© REUTERS / Jane Flavell Collins
Lawyers: Accused Boston Marathon Bomber Can’t Get Fair Trial in City
Three people were killed and over 250 wounded after two bombs exploded at the Boston Marathon on April 15, 2013. Dzhokhar and Tamerlan Tsarnaev were identified as suspects in the blast.

Tamerlan Tsarnaev was killed in a gunfight with police in the days following the bomb attack. His younger brother, Dzhokhar, was wounded and later arrested. Dzhokhar is on trial in a Boston court for his involvement in the bombing, and if convicted, he could receive a death sentence.

Dzhokhar Tsarnaev’s defense attorneys have sought information related to Todashev’s claim that he and Tamerlan were involved in the Waltham murders. The defense has argued those details may be crucial to the case against Dzhokhar.