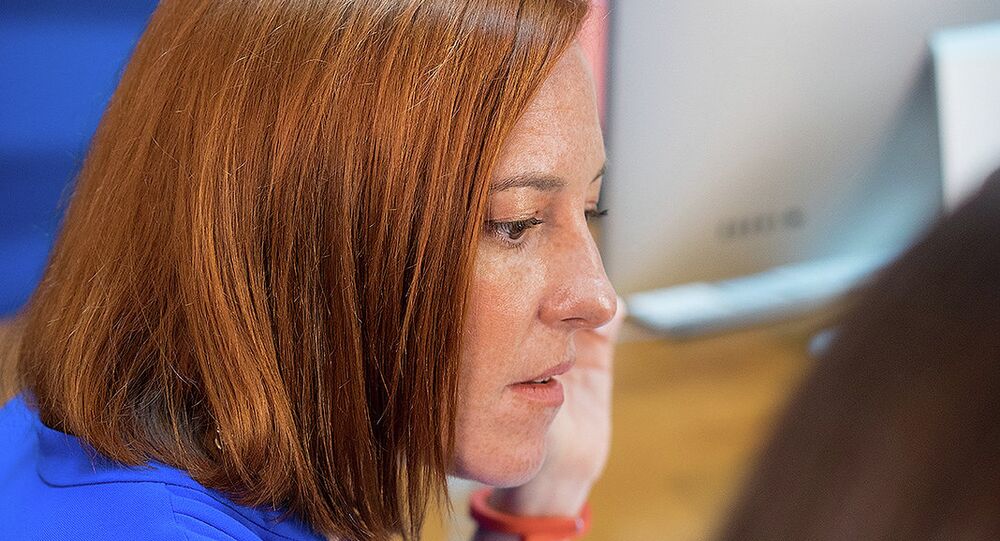 US Department of State spokesperson Jen Psaki says that Washington sees some improvement in the situation in Eastern Ukraine in the past two days.

WASHINGTON (Sputnik) — Washington sees some improvement in the situation in Eastern Ukraine in the past two days despite continuing ceasefire violations, US Department of State spokesperson Jen Psaki said.

"There is a reduction we've seen over the past two days, which is a good thing," Psaki said in a press briefing on Thursday. "So, I wouldn't go so far as to call it a positive step, it's just a slight improvement."

© REUTERS / Gleb Garanich
Kiev Begins Withdrawal of Heavy Weaponry – Ukrainian Military
Psaki noted that the Organization for Security and Co-operation in Europe (OSCE) monitors have observed a decrease in the ceasefire violations in the last several days, although the violations still continue. She also said that for the second day in a row, the Ukrainians have not experienced any casualties.

The latest Minsk agreement on Ukrainian reconciliation was signed on February 12 by the leaders of Russia, Ukraine, France and Germany. It calls for a ceasefire in the Donbas region of Eastern Ukraine, a pullout of all heavy weapons from the frontline, an all-for-all prisoner exchange, a pardon and amnesty for individuals involved in the conflict as well as a constitutional reform in Ukraine.

Under the agreement, the heavy weapons withdrawal was scheduled to take place within two weeks beginning on February 17.

The self-proclaimed Donetsk People’s Republic (DPR) has withdrawn 90 percent of the heavy weapons from the line of contact, DPR leader Alexander Zakharchenko said on Thursday.

The Ukrainian military said on Thursday it had begun the first stage of the heavy weapons pullback, and added that the withdrawal would proceed only under OSCE monitoring.

Ukraine's Southeastern City Status Should Be Solved by Political Means