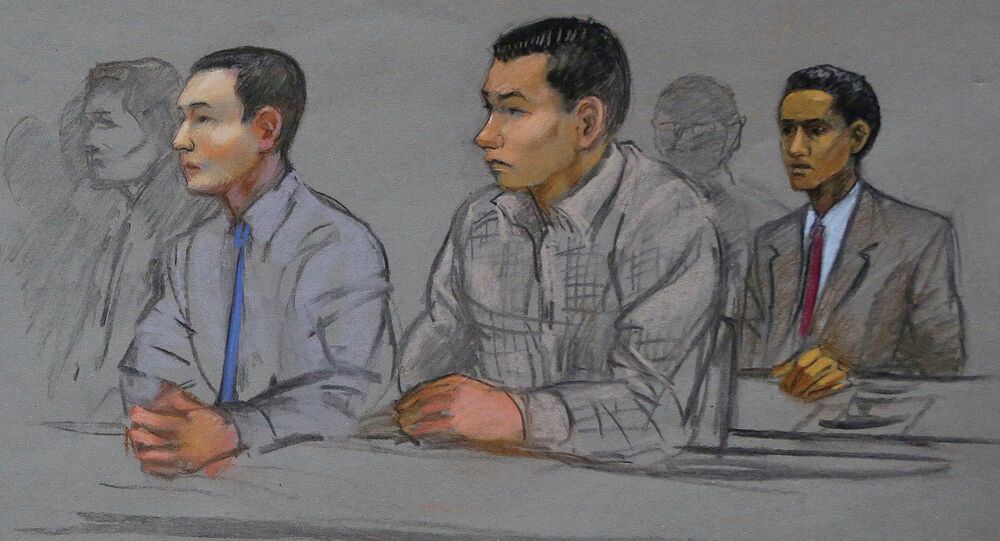 Friend of Boston Marathon Bombers May Be Acquitted – US Defense Lawyer

Defense attorney for exchange student Azamat Tazhayakov, a friend of alleged Boston Marathon bomber Dzhokhar Tsarnaev said that judge may throw out the case against the student, based on a US Supreme Court ruling in another case.

WASHINGTON (Sputnik) — A judge may throw out the case against Kazakh exchange student Azamat Tazhayakov, a friend of alleged Boston Marathon bomber Dzhokhar Tsarnaev, based on a US Supreme Court ruling in another case, a defense attorney for Tazhayakov told Sputnik on Wednesday.

“There is likelihood the judge could grant to motion [to acquit] based on the Supreme court’s decision,” Tazhayakov’s defense attorney Nick Wooldridge said.

A jury found Tazhayakov guilty of obstruction of justice for disposing of a backpack of empty fireworks in Dzhokhar Tsarnaev’s dorm room three days after the Boston Marathon bombing.

But Tazhayakov’s sentencing was postponed after US District Judge Douglas Woodlock said an unrelated case before the Supreme Court could affect the case.

© AFP 2020 /
Boston Bombing Trial Opening Statements Likely to Begin Next Week
On Wednesday, the Supreme Court overturned a conviction of Florida fishing captain John Yates, who was convicted of tampering with evidence when he threw undersized fish back in the ocean. The Supreme Court found the fish were not tangible objects used to record or preserve information.

“Defendants in the Yates were arguing tangible objects are only limited to things that are used in order to preserve information, not all tangible objects. So with that argument a backpack would not be a tangible object under the obstruction of justice statute,” Wooldridge said.

“If a tangible object doesn’t mean a backpack then the case is over,” Wooldridge said. “I’m cautiously optimistic.”

Tazhayakov, who faces up to 20 years in prison, would be set free if Judge Woodlock overturns the case based on the Supreme Court ruling.

The 2013 Boston Marathon bombings killed three people and injured more than 260. US law enforcement identified Dzhokhar Tsarnaev and his brother Tamerlan as suspects. Tamerlan was killed in a shootout with police four days after the terrorist attack.

Federal prosecutors are seeking the death penalty for Dzhokhar Tsarnaev. In his first public court appearance in July, 2013, Tsarnaev pleaded not guilty to all of the charges. The court is expected to finish jury selection for the trial this week, followed by opening statements next week.