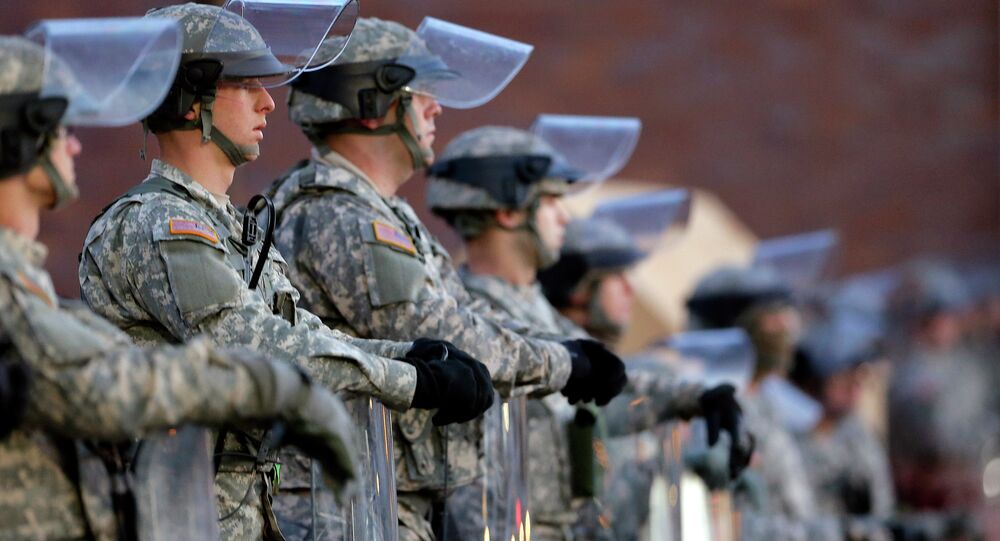 National Guard: Only Deadly Force Could Have Prevented Ferguson Riots

Guard and Missouri Highway Patrol officials claim the use of deadly force is the only thing that could have stopped the rioting and looting that followed the St. Louis grand jury’s failure to indict former Ferguson cop Darren Wilson in the shooting death of Michael Brown.

In a joint interview with the St. Louis Post Dispatch on Tuesday, Adjutant General Stephen Danner and Commander Major Bret Johnson defended the National Guard against accusations that officials did not do enough to protect the town following the announcement of the grand jury decision late last year.

“We made that decision to choose life over property," Johnson said. Had the Guard tried to stop the arson and looting on Nov. 24, "the only way to stop that, with the amount of people there, would have been with deadly force. We would have used citizen soldiers against our citizens of the state of Missouri.”

© AP Photo / Charlie Riedel
Police in riot gear use tear gas to clear the street in front of the Ferguson Police Department after the announcement of the grand jury decision not to indict police officer Darren Wilson in the fatal shooting of Michael Brown, an unarmed black 18-year-old, Monday, Nov. 24, 2014, in Ferguson, Mo.

Danner added that the Guard was never meant to engage with protesters, and troops were instead supposed to guard “critical points,” such as the airport, West Florissant Avenue, and the Canfield Green Apartments, where Brown was shot on August 9.

In fact, documents released to the Post Dispatch Tuesday by the state’s governor Jay Nixon in response to a public records request corroborate Danner’s words. They indicate the Guard had not been given the authority to stop the violence; Guardsman were not supposed to shoot to protect Ferguson property, make arrests, or act to prevent most crimes, according to Courthouse News.  They were intended only to support Ferguson police.

“That was never the plan, to have the Guard in Ferguson,” Danner said. “When you’re dealing with a civil disturbance and a tight knit group of folks coming at you, you cannot string your soldiers down the street like so many parking meters. That is a danger to them.”

Danner also explained that the Guard’s late arrival on the scene of protests was not his fault, as he was waiting on orders from the Highway Patrol.

In response to concerns about the over-militarization of police prior to the grand jury’s decision, Johnson explained that the command staff met with a coalition of protesters and planned to keep the police out of riot gear, a move protesters believed would incite even more violence.

© AP Photo / Charlie Riedel
Barbara Jones, joined by other protesters, raises her hands, Monday, Nov. 24, 2014, in Ferguson, Mo., more than three months after an unarmed black 18-year-old man was shot and killed there by a white policeman. Ferguson and the St. Louis region are on edge in anticipation of the announcement by a grand jury whether to criminally charge Officer Darren Wilson in the killing of Michael Brown.

“If that was the case and we’re trying to do everything from our part to keep things calm, why would we have military soldiers in areas we knew were going to be active protest areas?” said Johnson, whom Nixon has nominated to become the next patrol superintendent.

The National Guard warned Governor Nixon in October, prior to the grand jury decision, that he should mobilize them so that President Barack Obama wouldn’t have to send troops to Missouri.