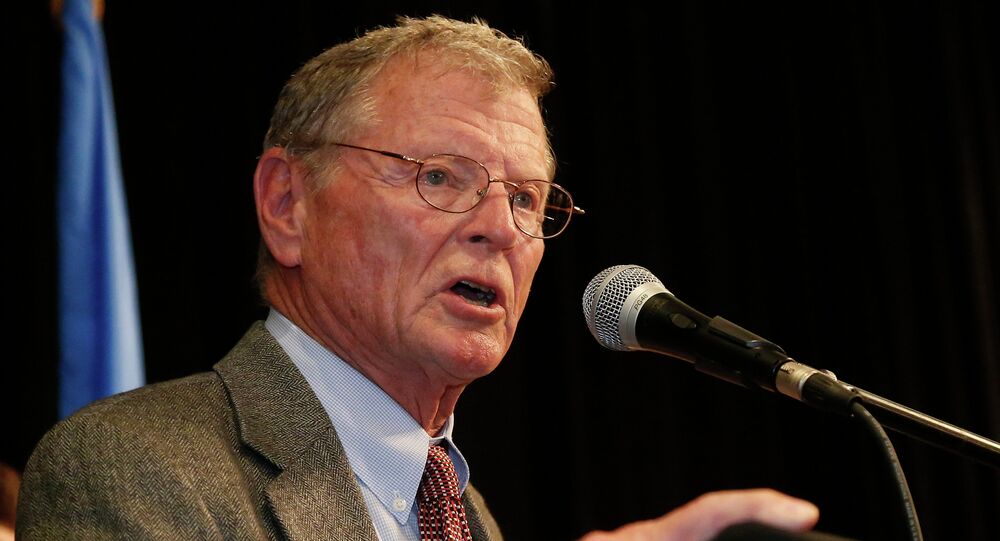 The 'exclusive' photos of 'Russian invasion in Ukraine' in 2014 turned out to be easily found in the Web, with at least one of them dating back to 2008. Now, US senator James Inhofe is furious with the Ukrainian delegation for setting him up with the 'evidence'.

© AP Photo / Dmitry Lovetsky
OSCE Head Confirms No Russian Troops in Donbass
MOSCOW (Sputnik) — Questions have been raised about the veracity of reports that claim Russian troops have invaded Ukraine after US Oklahoma Sen. James Inhofe confessed that several photos of Russian convoys he obtained from a Ukrainian parliamentary group were taken during the 2008 Georgia conflict, the Washington Free Beacon said.

On Tuesday, the Washington Free Beacon ran a story that unveiled "exclusive" photos of victims of militia bombs and Russian armed vehicles seemingly rolling into Ukraine.

© REUTERS / Valentyn Ogirenko
Sending US Lethal Weapons to Ukraine ‘Throwing Gasoline Onto Fire’-Experts
The photos were provided to Inhofe's office in print by an obscure Ukrainian delegation, led by a Georgetown professor, who said the images were taken at the height of Russia's alleged military incursion between August 24 and September 5, 2014.

Inhofe's spokeswoman Donelle Harder was cited as saying they had checked back with their sources – none of them high-level Ukrainian officials – before releasing the photos. She said they had been quite confident about their authenticity since the imagery allegedly matched reports about the Ukraine conflict.

But speaking to The Mirror on Thursday, Sen. Inhofe confessed he was "furious" to learn that at least one of the photos was taken by Associated Press during Russia's military operation in Georgia back in 2008. Several other images are readily available elsewhere online and can be found using a Google Images search.

Among the Ukrainian delegation was Semen Semenchenko, the commander of the "Donbas" volunteer battalion and a newly elected member of the Verkhovna Rada. Earlier, he was known as Konstantin Grishin and was reportedly suspected of fraud in Crimea.

This could end Semen Semenchenko's career RT @RosieGray here are the people who gave fake photos to Inhofe’s office pic.twitter.com/ddON6vyjCW

© AP Photo / Pavlo Palamarchuk
US House Proposes $1Bln in Lethal Aid, Military Assistance to Ukraine
The senator said the Ukrainian parliamentarians did themselves a disservice by providing the photos.

However, the congressman claimed this did not change the fact that he had plenty of evidence that Russian troops were involved in fierce fighting in eastern Ukraine.

Sen. Inhofe is the author of a bill that would authorize US President Barack Obama to arm Ukrainian troops with lethal military aid. On Monday, President Obama said he did not rule out sending weapons to Ukraine.

© AP Photo / Charles Dharapak
US Considers Sending Lethal Aid to Ukraine
Several European leaders earlier made it clear they would not arm Ukraine in the present circumstances. A ceasefire in eastern Ukraine is set to begin late Saturday following crunch talks in Belarus.

Russia has been accused of sending troops and weapons to self-defense forces in Ukraine's southeast, a claim that has never been proved.

US Senator Urges Obama to Inventory Lethal Aid to Kiev